Governors’ Spouses from LREB Want their Offices in the Constitution 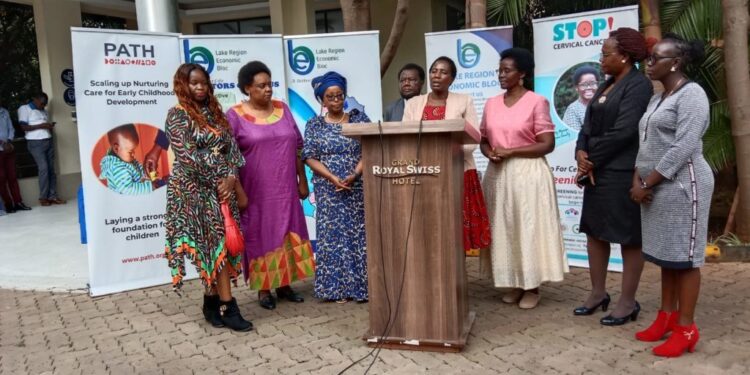 The spouses of Governors drawn from the Lake Region Economic Bloc (LREB) want their offices entrenched into the Constitution to attract funding.

Nyaribo further noted that they rely on partners and other donors to be able to respond to some of the needs affecting children and women in the society.

“We are non-political; we are not funded by the county governments. We need to be entrenched into the Constitution,” she said.

Moreover, the first lady of Nyamira county said that more often, the community rushes to them with a list of problems that needs to be addressed. According to her, with funding, they would complement the work of the Governors.

While speaking during a press conference in Kisumu on Thursday, November 17 during the LREB 1st inaugural meeting, Nyaribo said they are determined to address cases of early childhood education besides sanitary pads, widows, and persons with disability.

“We have a lot on our plates, as women we are able to see these problems and react instantly,” she said.

She was flanked by other first ladies from the counties of Trans Nzoia, Kisumu, Busia, Kericho, Migori and Siaya.

Also Read: Baichu Says He Has the Right to Attend Meru Governor’s Meetings

She further called upon county assemblies in the region to pass policies that are friendly to children and women.

“Entrench programs that target children and women in the County Integrated Development Plan (CIDP) so that they can be funded by the county governments,” the LREB chair said.

In addition, Migori County first lady Agnes Ochilo who is the deputy chair of LREB noted that coming together will look into the issues of children holistically.

“We will walk with our children from conception all the way to three years, and we will rally other Blocs to accommodate their women to champion this course,” said Ochilo.

Agnes Ochilo announced that their initial name was the first lady’s association but with the election of Gladys Wanga as Homa Bay Governor, they would incorporate her husband and the name changed to first spouses of the Governors.

Nanyuki: KDF Soldier Kills Girlfriend and Turns Gun to Himself