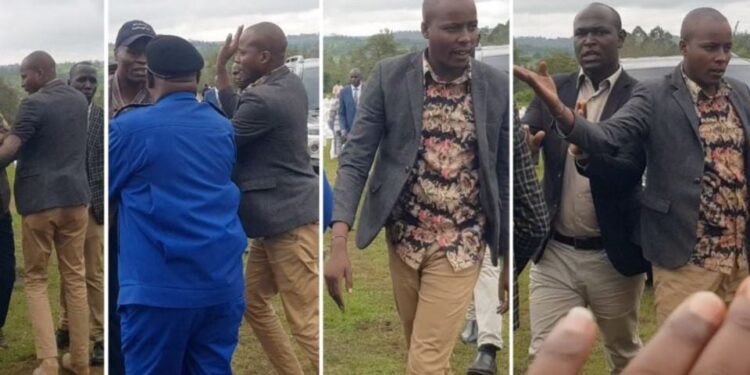 A security detail attached to Pastor Dorcas Gachagua, the wife of Deputy President Rigathi Gachagua assaulted a journalist in public during an event in Muranga.

Mwangi Muiruri, a journalist with the Nation media group was assaulted  while covering an event that was graced by Ms Gachagua at Grey Stone market in Muranga.

He was assaulted while recording videos for the event

They slapped him even as he begged to be told what mistake he had committed.

Journalist at the event protested and prevented police officers from forcing Muiruri into a police van.

Also Read: Chiefs in North-Eastern to be Issued with Firearms

Police officers also confiscated a phone from a journalist who was trying to record the incident and deleted all photos from it.

The Media Council of Kenya in a statement condemned  the attack terming it shameful.

“It is regrettable that despite clearly displaying his media badge,and following all instructions given by security officer,the journalist was physically assaulted and verbally abused yet he opposed no danger to anyone” said Omwoyo.

MCK regretted what it terms as an emerging trend where police officers in plain clothes guarding senior government officials act with impunity and attack journalists in contravention to known laws and norms.

“The Media Council of Kenya urges the Independent Police Oversight Authority to identify,publicly name and take appropriate action against the officers involved to not only protect press freedom but also guard against impunity by those acting under the false guise of anonymity,”Omwoyo equipped.

CAK Report Reveals Drop In Mobile Penetration In The Country

Take a Political Stand to Fight for Your Interests:  Ruto to The Church