by Lynn Kibebe
in Nairobi, News
0 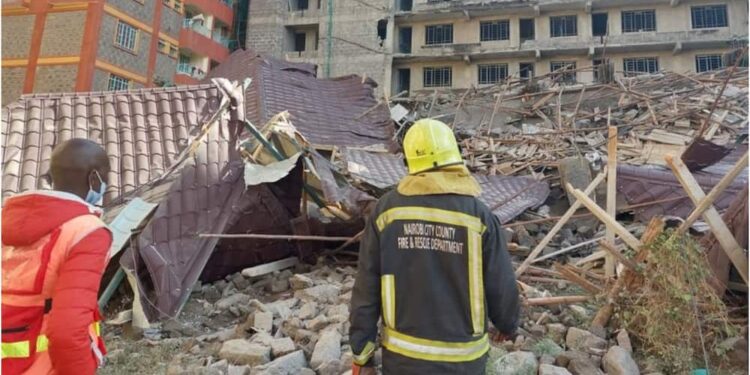 Building that Collapsed in Seasons area of Kasarani. Phptp/Courtesy

This is after three people died when a 7-storey building collapsed in Seasons area, Kasarani, on Tuesday, November 15.

Moreover, the three officials were also asked to show cause and have ten days to respond to the allegations, which include inadequate supervision.

Failure to do this will lead to further disciplinary action being taken against them.

Furthermore, the Nairobi County government, in a statement to newsrooms on Friday, November 18 reported that it has forwarded the names of the officers to the Directorate of Criminal Investigations (DCI) for further investigations.

“If I find any officer from Nairobi County culpable, at any point, for allowing construction of non-compliant developments to continue they will go home and be charged,” Governor Sakaja said.

“The developer of the building in Kasarani is responsible for the deaths and we will work with the DCI to hold him accountable. He did not have permits from the County and has continuously ignored enforcement notices to stop construction, this kind of impunity must stop.” Sakaja added.

These remarks follow preliminary investigations which confirmed that the building had no statutory approvals from Nairobi City County nor from National Construction Authority (NCA).

“The developer had in the past ignored non-compliance notices with the latest being issued on the morning of the incident, Tuesday 15th November. NCA closed the construction site the same morning marking it dangerous and hazardous, however, the owner ignored the notice and reopened the site later the same day,” Nairobi County said in the statement.

Nonetheless, Governor Sakaja has since re-formed the Urban Planning Technical Committee (UPTC) which was initiated in 2009 to succeed the Town Planning & Works Committee.

The multi-sectoral committee will facilitate the evaluation and consideration of applications for development permission submitted to the planning authority and will meet twice a month.

Caffeine Could have Negative Impacts on Unborn Children