by Jackson Okata
in Nairobi
0 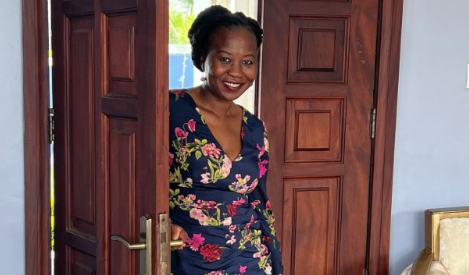 Former IEBC Commissioner Roselyne Akombe.She returned to Kenya after staying in the US for six years following her resignation.Photo/Roselyne Akombe.Twitter

After six years of being away following her dramatic resignation, former IEBC Commissioner Roselyn Akombe finally returned to Kenya.

She posted photos of herself captioned “No place like home! #Kenya”.

In 2017, Akombe fled the country to New York, United States.

This was a week before the slated presidential elections re-run, on October 26.

Soon after arriving in the US, Akombe resigned as a commissioner of IEBC.

In an interview with the BBC, she said she had fled in fear for her life.

“You’ll be suicidal to think that nothing will happen to you. I have never felt the kind of fear that I felt in my own country,” Akombe told the BBC.

The Independent Electoral and Boundaries Commission was under “siege”, she said, adding that it was divided.

Akombe feared for her life

At the time of her resignation, Akombe claimed that the commissioners and other IEBC personnel had been receiving death threats.

She said the death threats were anonymous, further claiming that she had been put under pressure to resign.

She reiterated that she did not “feel safe enough to be able to go home” at the time and subsequently, in the near future

Akombe had further claimed that IEBC was competent enough to hold the October 26th repeat elections.

“IEBC would not be able to conduct a credible election, arguing that there were things that were going wrong that the commission was not telling Kenyans about,” she said.

She previously served as the Chief of Policy at the Policy and Mediation Division, Department of Political and Peace building Affairs at the United Nations in New York. In 2017,

She also served as an economist with the African Union.

Dr. Akombe is an advocate for the protection of human rights, social justice, environmental protection, and inclusion of youth and women in all political and socioeconomic spheres of life.

Prior to her work with the African Union and the United Nations, she was active in the Kenyan student movement, civil society and the women’s movement.

She continued this work in the United States with WomenRising Inc. focusing on economic opportunities for Black women.

Dr. Akombe supports several causes dedicated to social justice and the full involvement of youth and women in all aspects of life.

She holds a Bachelor’s degree from the University of Nairobi and Masters and Doctorate degrees from Rutgers University.

Kibwana to Kalonzo- Baba is Not About to Retire