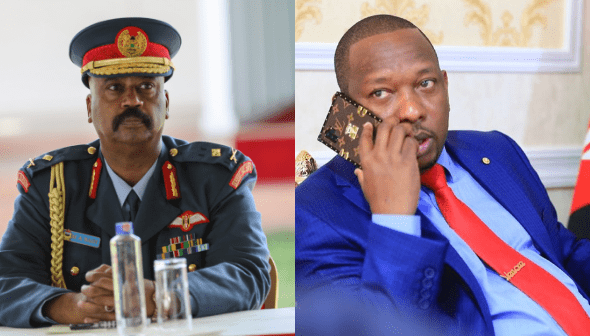 Tough fights continue to sprout on the leadership of Nairobi County between the Nairobi Metropolitan Services (NMS) and Nairobi County Governorship with both factions complaining about sabotage on delivery service to the residents of Nairobi.

On 26th February 2020, various county functions were handed over to the National government in a deal signed at State House in the presence of H.E. President Uhuru Kenyatta, embattled Nairobi governor Mike Mbuvi Sonko and Devolution C.S. Eugene Wamalwa, among others.

The functions transferred were health, transport, public works, utilities, and ancillary services together with county planning and development.

Since then, NMS Director-General Mohamed Badi has been displeased with Sonko’s decline in handing over the contracts and/or required documentations of the transferred functions.

As a result, Governor Sonko and General Badi are reading from different legal scripts with disagreements ensuing further over the county contracts, pending bills, payrolls, and shift of the healthcare management.

The on and off fights over management of payroll as of 31st August 2020 continued with more than 6,000 county staff unpaid for over four months.

On 6th September 2020, the duo continued with their tussle over contracts and pending bills management. Badi wanted the pending bills and contracts transferred to him for payments but Sonko maintained that NMS can’t take over such payments as contracts are not transferable.

Additionally, Governor Mike Sonko upheld that all the contracts entered into by the county government before the establishment of NMS should be completed and paid by the county while NMS be responsible for the new projects, they entered into going forward.

“The contract is between the county government and the contractors so why would NMS want to transfer them, yet contracts are not transferrable? Whatever contract they had with the contractors should be completed and paid,” said H.E. Mike Sonko.

On Tuesday 28th September 2020, contractors complained about uncertainty over payment of projects undertaken which has stalled their completion. This emerged since Nairobi Governor’s administration is yet to hand over projects under the transferred functions to NMS more than five months later. The fear of not being paid threatens efforts by the contractors to complete the projects contracted.

The Nairobi Metropolitan Service has asked the Controller of Budget and the Senate to oblige Nairobi County to release Sh253 million meant for the provision of healthcare services.

The officials from NMS led by deputy director-general William Kangethe and director for health services Josephine Mbae told the Senate Health Committee that despite the Health department being among the transferred functions, the county government is yet to change signatories for the bank accounts.

The money in dispute is Kshs. 253,000,000 meant to benefit the provision of services for hospitals and dispensaries in Nairobi County.

Therefore, NMS cannot access the money to run the level two and three hospitals in the city neither can it do renovations or buy drugs for the facilities.

In a special interview with NTV, Badi wanted to make it clear that his appointment is not a military take over, and that he is only interested in service delivery and not politics.

“I saw a lot of suffering in the city especially in informal settlements. I must deliver and am not looking for votes. I have taken this as a national duty,” he said.

“When politicians see you serving common citizens, they think that you are cutting down their influence. I have no problem with Governor Sonko. I am doing this job on his behalf,” added Badi.

He acknowledged the challenges faced in fixing the capital city saying he works diligently and has so far managed to achieve the goals set.