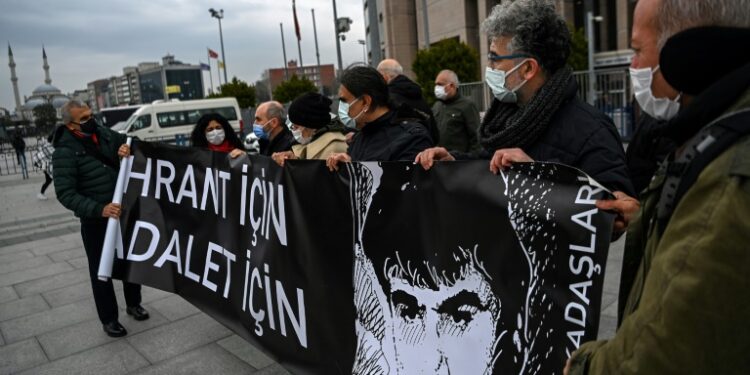 AFP - Demonstrators held banners reading "For Hrant, For Justice" in front of the Istanbul court

Dozens of suspects faced a range of charges over the 2007 death of Hrant Dink, who was shot twice in the head in broad daylight outside the front door of Agos, a bilingual Turkish-Armenian newspaper he edited.

The 52-year-old’s death plunged Turkey’s Armenian community into mourning and sparked a sprawling trial that lasted over a decade and involved top security officers who were accused of knowing about the murder plot but failing to act.

Dink’s work focused on mending ties between Ankara and Yerevan, still sorely strained by the mass killing of Armenians in the Ottoman Empire during World War I, which Turkey refuses to recognize as genocide.

The journalist’s family and colleagues accused the highest echelons of Turkey’s police and security services of being behind his death.

But charges against another senior security officer were dropped due to the statute of limitation, and the former police chiefs of Istanbul and the Black Sea region of Trabzon — where the confessed killer was from — were acquitted.

Ogun Samast, who was an unemployed 17-year-old at the time, had confessed to the murder and was sentenced to almost 23 years in jail in 2011.

Dink’s supporters and human rights activists still believe that the most senior police officials have gone unpunished and want the investigation and trials to run on.

“Some of those responsible for this assassination, including the sponsors, have still not been prosecuted,” said Erol Onderoglu, Turkey representative for Reporters Without Borders (RSF), who has closely followed the trial.

“This partial justice rendered after 14 years leaves a bitter taste and should not mark the end of the search for the truth.”

For years, prosecutors have looked into alleged links between the suspects and US-based Muslim preacher Fethullah Gulen, who is accused of masterminding a failed coup against President Recept Tayyip Erdogan in 2016.

The Istanbul court on Friday ruled that Dink’s murder was committed “in line with the objectives of Feto” — an acronym Ankara uses for Gulen’s banned movement.

Dink’s wife Rakel had said in January that blaming Gulen for her husband’s death nearly a decade before the failed coup was akin to saying: “I didn’t kill him, but my hand did”.

A lawyer representing Dink’s family vowed to appeal the ruling with the Supreme Court.

“It is a verdict that did not condemn all those responsible,” lawyer Hakan Bakircioglu told reporters.

“This is verdict resulted in a wrongful acquittal of several people responsible for the the assassination, whose guilt was provided with proof.”

The marathon trial, which Turkish media said involved 131 hearings, resulted in the acquittal of 37 defendants.

Twenty-six were sentenced to jail terms of various length, while nine remain at large and have warrants out for their arrest.