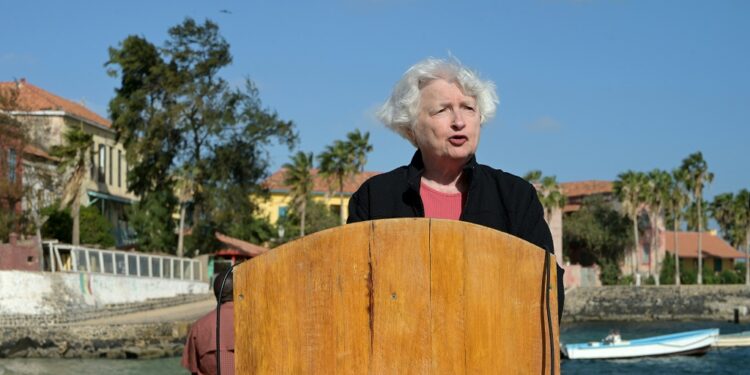 "We are still living with the brutal consequences of the trans-Atlantic slave trade," Janet Yellen said at Senegal's Goree Island | AFP

Treasury Secretary Janet Yellen said Saturday the histories of the United States and Africa were “intimately connected” by the “tragedy” of slavery, as Washington seeks to strengthen relations with the continent.

Speaking at Goree Island off the Senegalese capital of Dakar, the largest slave trading center on the African coast, Yellen voiced “an overwhelming sense of sadness and pain thinking about those stolen from their families.”

“In both Africa and the United States, even as we have made tremendous strides, we are still living with the brutal consequences of the trans-Atlantic slave trade,” she said alongside Goree’s Mayor Augustin Senghor.

“Ultimately, Goree Island reminds us that the histories of Africa and America are intimately connected,” she added.

“What I take from this place is the importance of redoubling our commitment to fight for our shared values and principles wherever they are threatened –- in the United States, in Africa, and around the world. We have more work to do.”

Yellen arrived in Senegal on Friday, the first stop on a visit aimed at forging a new “mutually beneficial” economic strategy toward Africa, where Russia and China are aggressively courting countries.

“A prosperous continent won’t just benefit Africa –- it will help to strengthen the American and global economies as well,” she said Friday after meeting officials including Senegal’s President Macky Sall, who is also chairman of the African Union.

Yellen is scheduled to travel to Zambia on Sunday, and later to South Africa.