IEBC To Deploy Manual Registers As Directed By High Court 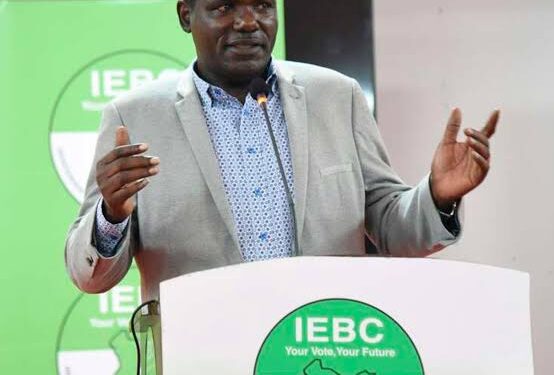 The Independent Electoral and Boundaries Commission (IEBC) has agreed to comply with the recent ruling by the High Court to include  manual registers in the August 9 general election.

While addressing media personnel on Friday, August 5, IEBC chairperson Wafula Chebukati said, the commission would deploy manual registers to the polling stations nationwide ahead of the elections.

“We shall now deploy the printed register of voters at the polling stations where the names of the voters shall be crossed out after identification of voters using the KIEMs Kit,” said Chebukati.

“The commission commits to adhere to the rule of law and will facilitate the realization of political rights of Kenyans as is capitulated in Article 38 of the constitution in order to deliver a free, fair and credible election.” He added.

Moreover, Chebukati noted that the manual registers are a digital printout. He added that it will be availed at the polling station for use alongside biometrics and both as a complementary mechanism.

“Manual registers have all the details, the photo, ID number…full details of the voter excluding the biometrics. It has all the details as per the KIEMs Kit and will be used as per the judgement of the Court of Appeal and the High Court,” Chebukati remarked.

Additionally, the IEBC chairperson stated that the manual registers has two levels of usage; first,  it will be crossed out at the same time with verification by the biometrics and also be used as a complementary if the KIEMS Kit fails.

Despite admitting the risks associated with the manual registers as they earlier stated, Chebukati said the commission was committed to abiding by the constitution and honoring the court directive.

“The commission must follow the laws of the land. We don’t make our own law, in fact, part of the reforms we sent to the parliament was around the amendment of these provisions in terms of the printed register but they didn’t see the end of the day,” he noted.

Nonetheless, in regard to the KPMG report involving the transfer of voters, Chebukati said IEBC had already forwarded the case to the Director of Public Prosecution and investigations are underway.

Furthermore,  he reported that the officers involved had since been suspended from duty.

The court directed that all necessary steps be followed to ensure that the petitioner’s and citizens’ rights under the constitution are respected.

Moving the Maasai: Tanzania is repeating Kenya’s colonial past