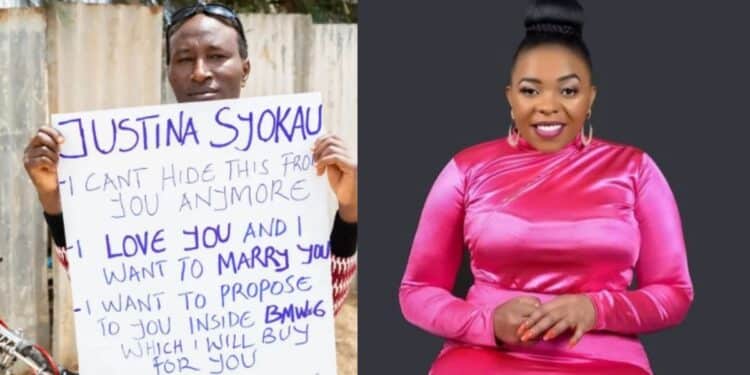 Former Churchill Show comedian Consumator has come out to profess how much he is in love with gospel musician, Justina Syokau.

Consumator, in a true Kenyan manner, sent out a marriage proposal to Justina Syokau using a placard.

Taking to his Instagram page, the comedian shared a photo and video of himself holding a placard bearing his marriage proposal to the Twendi Twendi hitmaker.

The comedian laid out the things he will do for Justina Syokau should she accept his marriage proposal.

For starters, Consumator lured Justina Syokau by informing her that he would like to officially propose to her inside a BMW 6, which he would have bought for her.

The funny man went on to reveal that their wedding will be held in Zanzibar and atop a fancy boat.

“Justina Syokau, I cannot hide this from you anymore. I love you and I want to marry you. I want to propose to you inside a BMW 6 which I will buy for you. I will wed you in Zanzibar on top of a boat,” Consumator’s placard read.

Consumator’s marriage proposal to Justina Syokau sparked mixed reactions on social media with quite a number of people condemning him for chasing clout with the move.

According to most people who commented on Consumator’s post, the comedian could do better than try to seek relevancy with such lame publicity stunts.

Also Read: Justina Syokau Cries for Rayvanny’s Love, Promises to Give Him 5 Kids

Others, however, supported him and urged him to look for Justina Syokau in person and do the needful.

The musician, through an interview with Radio Maisha said she would really love to marry Rayvanny and possibly sire five kids for him.

Her heavy crush on the singer was triggered by the latter who commented on the former’s social media post, calling her the Queen.