Justina Syokau Cries for Rayvanny’s Love, Promises to Give Him Five Kids 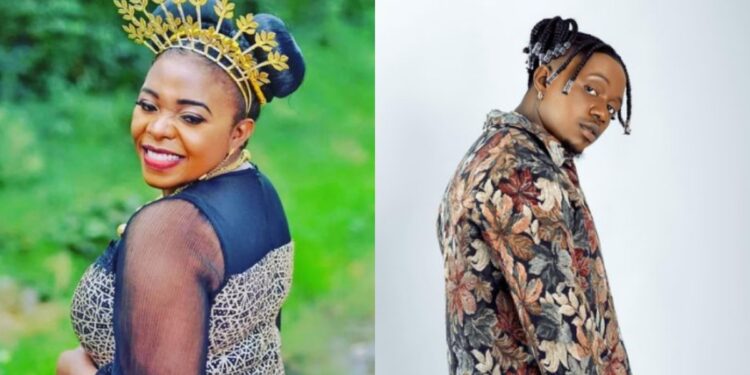 Syokau said she is ready to get married to Rayvanny. Photo: Justina Syokau/Rayvanny/Instagram.

The Twendi Twendi hitmaker has disclosed that she is ready to get married to Rayvanny because she is deeply in love with him.

The musician who made the confession during an interview with Mwende and Clemmo on Radio Maisha said she does not mind siring five children with the Kwetu crooner.

According to Justina Syokau, she fell in love with Rayvanny because of his experience in matters of love, especially the theory part.

Justina noted that their marriage will be successful because they will merge Rayvanny’s theory part with her knowledge of the practical part of love.

The bubbly songstress assured the world that Rayvanny will never ever leave her should he agree to marry her because she will not only treat him well but also give him unlimited doses in the bedroom.

She disclosed that she is hopeful Rayvanny will come for her since he has been flooding her DM with sweet words.

In fact, Justina said she had already accepted to be Rayvanny’s wife even before he asked her to be his lover.

”Rayvanny has been in my DM, he called me the female queen. You know he is the king and now he knows I am the queen. I am madly in love with him and would love to marry him soon. I can give him the best marriage, five kids and satisfaction in the bedroom. He is an expert when it comes to the theory of love and I am good with practical, that house will be needed Fire engines on end,” Justina Syokau said.

The musician also used the opportunity to clear the air on why she turned down Ringtone’s offer to be her man.

Justina noted that she is heavily built with curves and edges in the right places while Ringtone has a lean body that cannot handle her type.

She confessed that indeed Ringtone is rich and has everything any woman would want in a man but can be a prospect failure in bedroom matters.

UN to agree on plan for ‘historic’ plastics treaty