by Jackson Okata
in Accidents
0 0
0 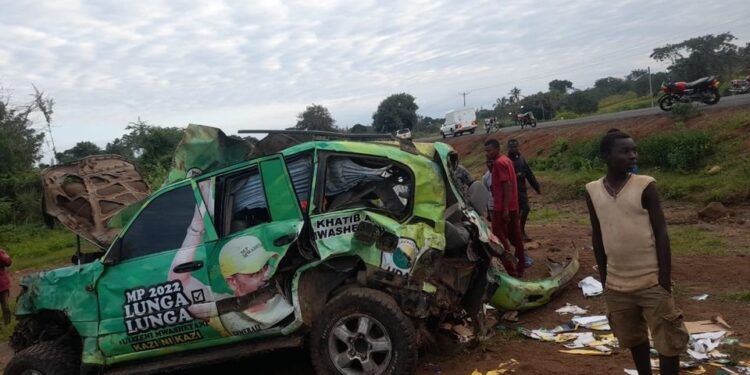 The vehicle suffered a tyre burst before crashing.Photo/Courtesy

The car was ferrying Mwashetani’s campaign team members  before it was involved in the accident.

The driver lost control of the vehicle after a tyre burst as he was speeding along Likoni – Lunga Lunga road.

One person survived the accident

“They were coming from Kanana heading to Lungalunga when the vehicle got a tyre burst and rolled. Preliminary investigations show the vehicle could have been at a high speed,” he stated.

The Prado rolled several times after veering off from the road.

Mwashetani was however not part of the team when the accident occurred.

At the time of the accident Mwashetani was at Tononoka grounds in Mombasa County for Deputy President William Ruto’s rally.

In May this year former Rabai Member of Parliament William Kamoti  lost his life after his vehicle crashed along on the Mombasa-Malindi highway.

The MP passed on moments after presenting his nomination papers to the Independent Electoral and Boundaries Commission (IEBC).