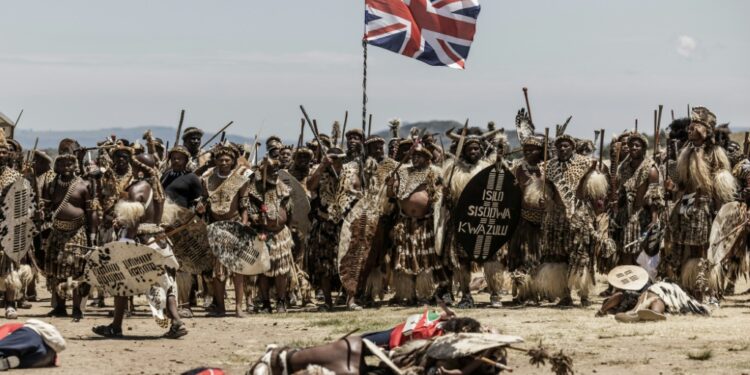 Wearing ceremonial animal hides, bone necklaces and brandishing spears, the Zulu warriors prepared for battle against the British redcoats on Saturday in a re-enactment of one of the most humiliating defeats inflicted on colonial troops in South Africa.

At the foot of the Isandlwana hill, which gave its name to the epic battle, the rocky ground is warmed by a blazing southern summer sun.

It was in this spot in South Africa’s southeast KwaZulu-Natal province that some 20,000 Zulu warriors attacked a British garrison and crushed the rifle-wielding soldiers after hours of fierce and bloody hand-to-hand combat on January 22, 1879.

“That day, we defeated the British. That battle is a source of pride for Zulu people and that’s how we built the Zulu nation,” Simelane Velaphi, playing a warrior, told AFP.

The Anglo-Zulu War is notable for several particularly bloody battles, including an opening victory of the Zulus at the Battle of Isandlwana.

On that fateful day, there were few survivors with over 1,300 British soldiers killed with the Zulus also suffering heavy casualties.

The crowd of spectators included the Zulu king and dignitaries from the First Welsh Battalion.

The Zulus make up a fifth of South Africa’s 11 million people.

A smattering of English tourists watched the re-enactment, decked in colonial hats and walking shoes, and inspected stone memorial engraved with the names of Imperial soldiers who died “for Queen and country”.

Small mounds of white pebbles mark the tombs of the fallen on the battlefield, now a protected heritage site.

“The bravery of both sides must be honored,” says British army officer John Murphy, a guest at the ceremony.

Over a century ago news of the crushing defeat of the British army, the backbone of an empire that spanned the globe, caused shock waves throughout Europe.

During the Industrial Revolution, Britain needed raw materials and labor.

The discovery of diamond mines in Kimberley but also gold and coal were coveted by the English colony in Cape Town.

Zulu King Cetshwayo resisted, and used the techniques of earlier influential monarch Shaka, a miliary genius who established the “ox head” tactic which was deployed on the day of the famous battle.

The British were stormed from the flanks, before being finished off in a dazzling frontal attack.

The Zulu triumph was short-lived. The following night, the British army inflicted the first of a series of definitive setbacks for the Zulu kingdom.

Nevertheless, history retains the improbable victory of spears against guns.

CS Duale Says the Govt' Will Fight Insecurity in Garissa