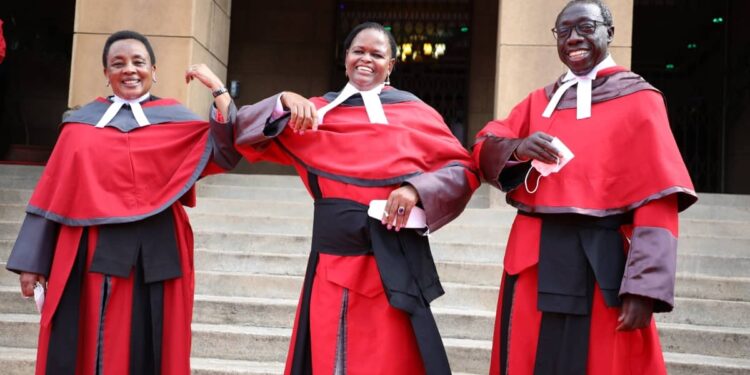 CJ Koome insisted on Friday, following the swearing in of Judge Daniel Musinga as President of the Court of Appeal, that all persons nominated by the JSC must be appointed in accordance with Kenyan law.

“As we welcome our 7 new justices at the court of appeal, this is a bittersweet moment for the 4 colleagues not with us.” CJ Koome said, “I reiterate my position as CJ & Chair of JSC to state that all persons recommended by JSC must be appointed as judges,”

The Chief Justice, who assumed leadership at a time of heightened schism between the Judiciary and the Executive, said she is aware of the difficulties the Judiciary is encountering, particularly with reduced capacity.

According to CJ Koome, the Appellate Court, which has a capacity of 30 Judges, currently has only thirteen Judges, who will soon begin sitting in court of appeal stations outside of Nairobi.

The stations have been inoperative since 2019 due to the capacity shortage.

At the same time, she seized the opportunity to defend the independence of the Judiciary, which she claims is under threat of capture by private and public sector players.

CJ Koome insisted in her speech that in order for independence to be fully realized, the third arm of government must be adequately funded.

“Judicial independence will remain an illusion if we don’t have our own funding,” she added.

She urged all judicial officers to perform their duties diligently and to maintain their independence.

“The attacks on the Judiciary are not new, but it requires every judicial officer to safeguard their judicial independence,” CJ Koome said on Friday “Decide cases without fear or prejudice. “

The latest development comes in the midst of lobbying for the appointment of six judges who were disqualified due to integrity concerns raised by President Kenyatta.

Police Officer Accuses Mungai Eve Of Eating His Money, Wants Her To Pay Back: “Ameniblock”