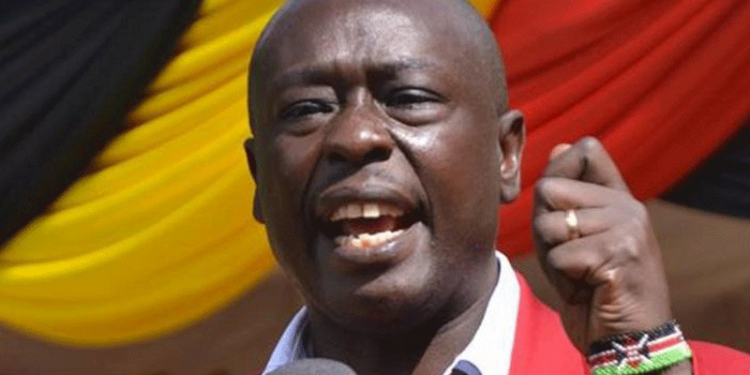 Mathira MP Rigathi Gachagua was on Friday morning arrested from his Nyeri home. He was picked up by DCI officers at 6 am and driven away to Nairobi.

It is not clear why he has been arrested but Gachagua, aka Kanda ya Wira is fighting corruption allegations by state institutions.

It is reported that detectives are piecing together details of how he registered 49 companies that he allegedly used to trade with various agencies in an intricate web that saw him win tenders worth more than Sh 12 billion. Gachagua has denied the claims.

In some instances, he has said, he was acting as a trustee of several companies listed as beneficiaries of his wealth.

The legislator says the allegations are politically sponsored.

Via FB post on Friday, Gachagua said dozens of DCI officers raided his Nyeri home to face up charges of money laundering.

“I am being driven to Nairobi at reckless speed to spend the weekend in the cells. I am happy it is finally over. It has been two years of hell; being arrested and released, writing countless statements, being prosecuted in the media, intimidation and harassment to me and family,” he said.

He added he was happy he has a chance to be vindicated in a court of law as courts are independent.

“To our tormentors and persecutors, you only have one year remaining. We shall have a new democratic Government that does not use the criminal justice system to manage politics,” he said.

He claimed that the government was unhappy with the loss of the Kiambaa by-election.

“Though I played a minimal role, I had no vote. Will you arrest all voters of Kiambaa? Kiambaa was just a tip of the iceberg, the handshake state faces a humiliating defeat in 2022.”

“In the fullness of time my innocence will be pronounced. I am not cowed or intimidated,” he said.

He added that he remains principled and consistent and his support for DP William Ruto remains steadfast and unshaken.

Some of his bank accounts were frozen to allow the police to investigate the source of the Sh12.5 billion that flowed through the accounts.

He is suspected of using proxies to fraudulently secure tenders through 22 companies, with himself as the sole beneficiary.