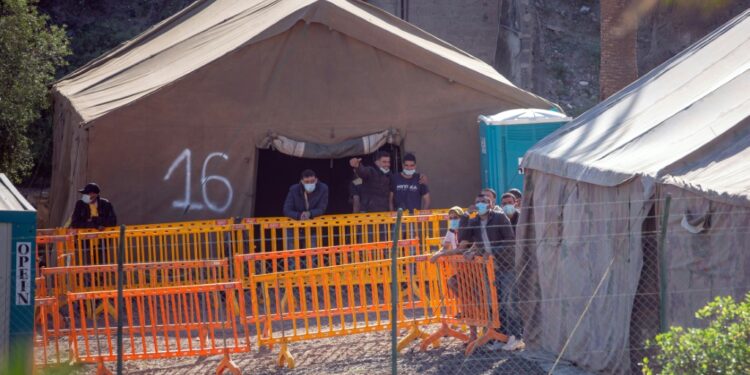 The migrants who died were reportedly trying to reach Las Palmas in the Canary Islands, where a temporary migrant camp set up by the Spanish army is pictured in November 2020 | AFP

The bodies of 13 Moroccans have been recovered after their boat sank off the country’s southern coast while attempting to reach Spain’s Canary Islands, Moroccan media reported.

Spain is one of the main gateways for migrants to reach Europe. Tens of thousands also try each year from the coastlines of other North African countries, including Libya where coast guards on Saturday rescued hundreds of migrants.

The 45 passengers on board the ill-fated Moroccan boat were attempting to reach the Canary Islands’ main city of Las Palmas when it hit a rock and sank Friday, “10 minutes after” embarking near the town of Mirleft, according to online news service Hespress.

About half of them, 24, were rescued from the water, the Arabic-language site reported.

One woman was among the dead, and eight of the passengers remained unaccounted for.

AFP contacted Moroccan authorities to confirm the deaths but received no immediate comment.

Morocco’s 2M news service reported the passengers had used an inflatable boat which was quickly “damaged and the victims found themselves in the middle of the waves”.

Located at Africa’s northwestern tip, Morocco is a transit country for many migrants, particularly sub-Saharan Africans. Fleeing poverty and violence, they seek to reach Europe from Morocco’s Atlantic or Mediterranean coasts.

Others attempt the crossing from Morocco’s Neighbours further east on the Mediterranean.

Naval special forces in eastern Libya, northwest of Benghazi city, intercepted a trawler carrying 650 migrants trying to reach Europe, according to the media bureau of eastern naval headquarters, in a Facebook statement on Saturday.

The west of war-scarred Libya had been the center of clandestine migrant departures. However, crossing attempts using trawlers and large-capacity fishing vessels have multiplied from Libya’s east, where a rival administration is in charge.

In October, the International Organization for Migration (IOM) said more than 14,000 migrants had been intercepted and returned to Libya during the year.

Libya is regularly criticized for its treatment of migrants, with human rights groups alleging horrific treatment at the hands of smuggling gangs and inside state-run detention centers.

Off the coast of neighboring Tunisia, more than 22,500 migrants had been intercepted this year, according to official figures up to October.

Spanish human rights group Caminando Fronteras (Frontline Defenders) said in early December that more than 11,200 migrants have died or gone missing while trying to reach Spain since 2018, an average of six per day.

The route between Morocco and the Canary Islands alone accounted for 7,692 of these deaths, the group said.

The second most dangerous route is between Algeria and Spain where 1,526 people died over the same period.

Since late 2019, the number of migrants attempting clandestine crossings along the perilous Atlantic migration route surged as patrols in the Mediterranean intensified.

Spain’s interior ministry said on December 15 that a total of 27,789 migrants had reached Spanish territory illegally this year, including 15,742 arrivals in the Canary Islands.

Why Ghana is no Longer West Africa's Economic Giant

Michelle Ntalami Denies Nothing about her Relationship with Fena Gitu