by Carolyne Rabut
in Rallies, Sports
0 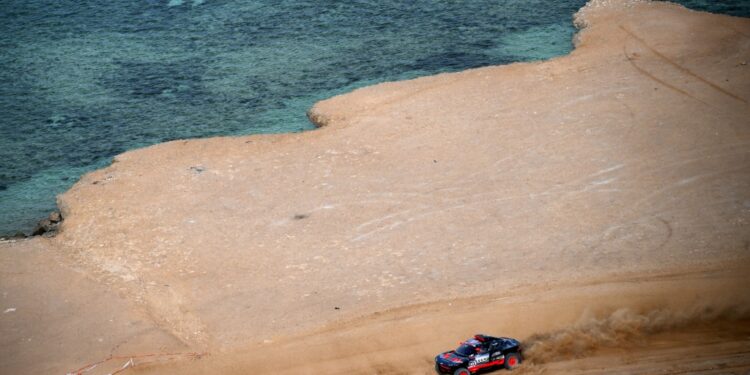 Sweden’s Mattias Ekstrom drove his Audi hybrid to victory in the 13km-long prologue of the Dakar Rally in Saudi Arabia on Saturday.

“It’s always nice to start in a good way, but, of course, the day is long, and the rally is even longer,” said Ekstrom.

“A good end to 2022, but tomorrow is the real start. We’ll have to try and be focused for another two weeks.”

The Swede’s Audi teammate Stephane Peterhansel the Dakar great who has won the event fourteen times (eight in a car and six on a bike) — rounded out the opening podium of the 45th edition of the Dakar.

“Finishing behind the trio is not a bad result from the perspective of fighting for the stage win tomorrow, which would come in handy to open stage 2 right before the key third stage,” the Qatari said.

The prologue acts to determine the order of the top ten starters in the first stage proper on Sunday, a 603km run including 368km of timed specials.

That was not lost on Ekstrom, who said it was “really good… (as) a junior in the sport, to start from the back so I have some tracks to follow”.

“The race is on,” added Peterhansel, often referred to as ‘Mr Dakar’.

“You put your helmet on at the start and you know you are about to be launched into the thick of it.

“We finished first, third and sixth. Personally, I did better than I expected. The course was more favorable to pure rally or rally-cross drivers, which I’m not, so it was a good result. I’m not used to producing strategies, but I’ll be in a good position to pick my starting order for tomorrow.”

“Last year, the strategy we had was basically completely the wrong direction of what I needed to do. I’ll just leave my mind open.

“Long stages to go, in 14 days, a lot can happen. It’s nice to win the prologue today, but it’s not going to guarantee anything. We’ll stay on two wheels, have fun and enjoy the desert.”

This year’s Dakar stretches 8,549 km over 15 days of racing, including a four-day excursion into the yet unexplored desert dunes of the vast Rub’ al-Khali, or Empty Quarter.

Some 790 riders, drivers and co-drivers set off in an array of motorcycles, cars, quads, trucks, and light vehicles when the race started on the shores of the Red Sea. It finishes in the eastern Saudi city of Dammam on January 15.