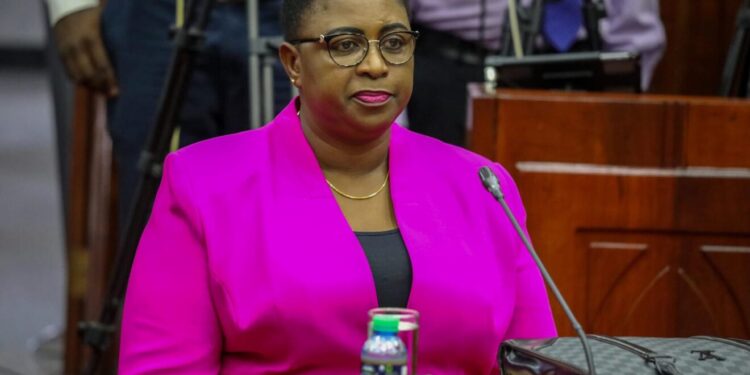 Aisha Jumwa has asked the Director of Public Prosecutions (DPP) Noordin Haji to file an application seeking to have the murder case against her withdrawn.

The Public Service Cabinet Secretary, through her lawyer Danstan Omari, argues that the evidence presented in court by the prosecution does not meet the threshold to hold the case.

“We are asking the Director of Public Prosecution to move to the Mombasa High Court and withdraw the murder case,” Omari stated on Wednesday, November 9.

In addition, Omari noted that they have written letters to the Office of the DPP to have the case withdrawn and to avoid having what he called miscarriage of justice.

“We have re-evaluated the evidence and we are of the view that the evidence doesn’t meet the threshold,” he noted.

Nonetheless, CS Aisha Jumwa is charged with the murder of Mr. Ngumbao Jola. Likewise, she is accused jointly with her aid Geoffrey Okuto.

Mr. Ngumbao was murdered during the Ganda by-election campaigns in 2019.

Furthermore at least three witnesses have testified in this case.

After floods, S.Africans wait hours for water amid fear of disease

As tobacco burns out, Malawi looks to cannabis