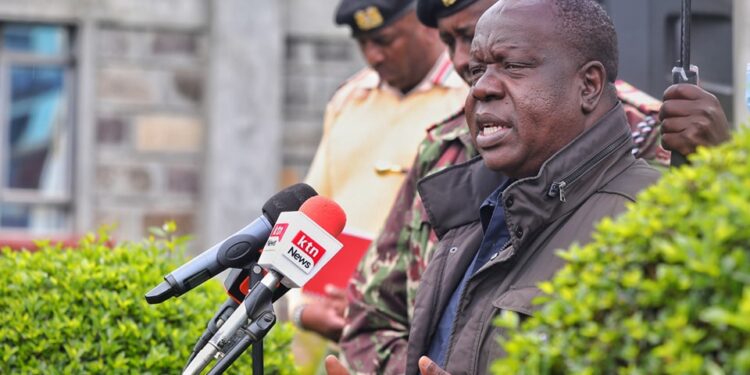 Matiang'i termed the allegations by DP Ruto as baseless.Photo/Courtesy

The Ministry of Interior and Coordination of National Government has dismissed allegations of a voter suppression campaign targeting Kenya Kwanza strongholds.

Speaking in Nairobi, Interior Cabinet Secretary Fred Matiangi said that no decision had been made to suppress voter turnout in Rift Valley region.

At the same time the CS  denied holding secret meetings with administration officials to coordinate disruptions on Election Day.

“There is no policy or intention to engage in any voter suppression campaigns,”  said Matiang’i

Matiang’i was responding to a statement by Deputy President William Ruto who named four senior security officials on Thursday and accused them of being part of a plan to sabotage Tuesday’s General Election.

The CS termed the allegations unfounded and baseless .

He further warned the Kenya Kwanza coalition against profiling members of the provincial administration.

Matiang’i said those behind profiling of Chiefs and their assistants will be held responsible.

Tuju: Nobody will be forced to stay in Azimio