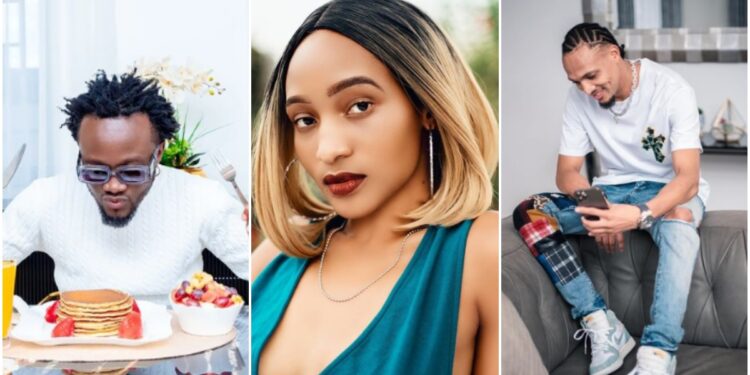 Mariana said Bahati and KRG did not pay her for her services. Photo: Mariana Katana/KRG The Don/Bahati/Instagram.

One of Kenya’s most beautiful video models, Mariana Katana has come out to accuse celebrated musicians Bahati and KRG The Don of not paying their video vixens.

Mariana has revealed that she worked for the aforementioned artists separately, but all failed to honour their promises of paying her and other video vixens she worked with.

Speaking during an interview with Nicholas Kioko, Mariana narrated how she was selected to be the lead video model in Bahati’s music video Adhiambo.

According to the hot lass, Adhiambo’s video director and Bahati had promised to pay her about KSh 5,000, buy her lunch and transport but failed to pay the full amount.

Mariana Katana went on to disclose that she only received KSh 2,500 from Bahati’s team and has never received any money even after a very long time.

”I was chosen to be the lead model for the Adhiambo video. We had been promised lunch, transport, and some KSh 5,000 each. But since I was the lead, the director said I should expect more. So, they sent me KSh 2,500 only, and have never received any money again from them. I decided to let go because it has been way too long,” Mariana said.

She also shared the same about working with the self-proclaimed richest Kenyan artist KRG The Don, whom she accused of failing to pay her even after working for him.

Mariana noted that she made a cameo on KRG The Don featuring Lava Lava’s music video Ushasema and dealt with the same disappointment.

She did not disclose the amount they had agreed she would be paid but admitted she only received half the pay with a promise of getting more the following day.

However, KRG The Don did not pay her the balance, and just like with Bahati, Mariana decided to let it go.

She wrapped up by exposing well-known artists by insisting that they are the ones who lead in not paying their video vixens unlike upcoming musicians who diligently pay vixens and in full.

Man Arrested While Selling His Albino Children For Ksh4.7 Million