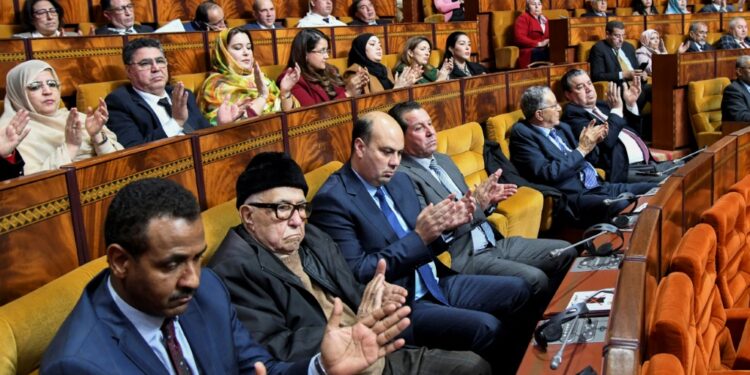 Moroccan lawmakers on Monday voted unanimously to review ties with the European Parliament, accusing it of meddling after a resolution that urged the kingdom to respect press freedom.

Members of both houses of Morocco’s parliament met in the capital Rabat for a joint session in response to the non-binding European text adopted on Thursday.

In a statement after their session, the Moroccan legislators called the European resolution “an unacceptable attack against the sovereignty, dignity and independence of judicial institutions in the kingdom.”

They said it had “seriously harmed the fundamental trust” between them.

As a result, Morocco’s Parliament “decided to reconsider its relations with the European Parliament and submit them for an overall evaluation,” said Rachid Talbi Alami, speaker of the House of Representatives. He gave no further details.

Under a 1996 agreement, Morocco and the European Union have been linked in tight economic and commercial relations, particularly in agriculture and fishing.

“Their decisions are not going to intimidate us, and we are not going to change our path and approach,” said Mohammed Ghiat, president of the National Rally of Independents, the biggest party in Morocco’s ruling coalition.

European lawmakers in Strasbourg had urged Morocco to “respect freedom of expression and media freedom” and to “guarantee imprisoned journalists… a fair trial”.

The Reporters Without Borders (RSF) watchdog welcomed the EU parliament vote as a break with “25 years of passivity”.

“Behind the scenes of this decision hides a country which we had thought of as a friend and a solid partner, but the smell of gas has made it lose it”, said Ahmed Touizi, of the Authenticity and Modernity Party.

Touizi, whose party belongs to the majority coalition, was referring to warming ties between Paris and Algeria, Morocco’s neighbor, and rival — and a major exporter of gas to European nations.

“Morocco has had enough of double standards,” Abdelmajid Fassi Fihri, of the Istiqlal Party, told AFP. He deplored the fact that the European Parliament had not condemned attacks on press freedom in Algeria.

Two of the most prominent journalists’ cases in Morocco are those of Omar Radi and Soulaimane Raissouni, both sentenced at appeal last year on sexual abuse charges.

Radi, 36, who has been critical of Moroccan authorities, was sentenced to six years in prison for rape and espionage, charges he denies.

Raissouni is serving a five-year sentence. He, too, has always maintained his innocence, and says he was prosecuted “because of his opinions”.

Moroccan authorities insist the judiciary is independent, and that the cases against journalists have nothing to do with journalism.

Last week European parliamentarians also said they were “deeply concerned” by allegations that Moroccan authorities had bribed its members and reaffirmed the European Parliament’s commitment to “fully investigating” corruption.

The corruption scandal involving MEPs that erupted last month sent shockwaves through EU circles in Brussels, with MEPs accused of taking bribes from Qatar as well as Morocco.

Both countries vehemently deny the accusations.

Following the European resolution, an “authorized source” at the foreign ministry in Rabat, quoted by a media outlet close to the government, said the EU measure would have “no impact on Morocco”.

The source said it “fits with the aggressions and harassments sustained by the kingdom from those disturbed by Morocco’s development, prosperity and strong role in the region.”

Posta Enters into Partnership with Tanzania