Nameless in Online Battle with Fan Over Signature Durag: “Maturity is Not What You Wear” 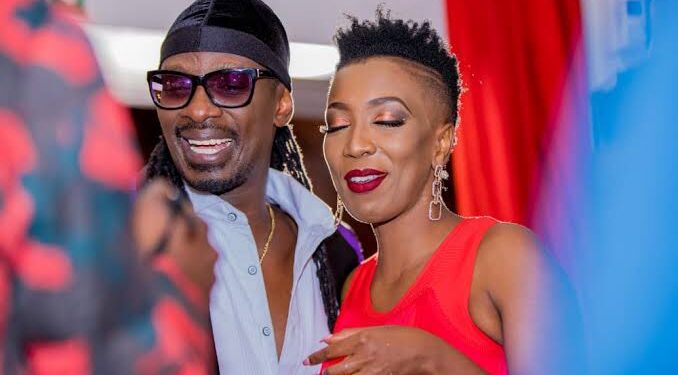 Legendary Kenyan musician David Mathenge, known to many as Nameless has for the umpteenth time been forced to explain the genesis of his signature durag and shades.

The musician recently had to take his time to explain to some of his fans why he always wears his durag and sunglasses.

Nameless would not have bothered to explain anything but was forced by a random critic who wanted to dim his shine with his mean comments.

As the story goes, Nameless posted a photo of himself with his daughter Tumiso at a local event.

The fan noticed Nameless was sporting a durag and thought of trying to troll him over the same.

The fan was so bothered by Nameless’ signature durag that he had to hit the comments section of the star’s post to maul him.

Through his comment, the confused fan told off Nameless for always wearing durags and caps.

In his own words, Nameless is so old to wear certain things such as durags.

“What is up with him, toa that rug from your head. When will you ever mature. You are not growing young. Every photo Ni kofia ama rug. Act your age bwanaa,” the fan shot.

In a quick rejoinder, Nameless took his time to explain to him and others why and the importance of his durags and caps.

The Nasinzia hitmaker simply told the fan that the durag, caps and sunglasses have always been Nameless’ identity, rather trademark in the industry.

In a true intellect manner, Nameless informed the fan that maturity is not measured by what one wears but how they do their things.

The father of three was merciful enough with his response as he pleaded with the confused fan to do his research well and also check on his self awareness.

“Maturity is not measured by age or by the things you wear but by growth in wisdom and self awareness. You should know by now my head gear and shades is just the Nameless Brand identity. Ongeza wisdom so you can realise some things quickly. Also go and check on your self awareness. It seems a little low. Grow it, itakusaidia in making critical life decisions. Tuzidi bro.” Nameless wrote.

Also Read: Justina Syokau Cries For Rayvanny’s Love, Promises To Give Him 5 Kids

His response was supported by hundreds of his fans who decided to maul the fan for his ignorance.

Quite a number of Kenyans asked the critic if indeed he has been living in Kenya.

A throng of those who supported Nameless backed him, holding that the durags and sunglasses have always been the musician’s trademark that any sane Kenyan should be familiar with.