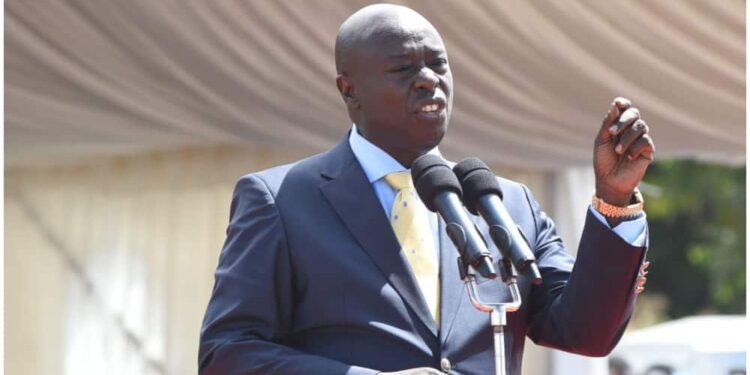 Deputy president Rigathi Gachagua has said the government will set up a task force in the coming two weeks to review the terms of service of security officers.

The review of terms of service is to address their remuneration and conditions of work.

While speaking during the National joint thanksgiving Service for Uniformed Disciplined Services at the Holy Family Minor Basilica, Nairobi, the deputy president stated that President William Ruto was committed to his promise of improving the working condition of the security personnel.

He further added that it will be accomplished in Kenya Kwanza government’s 100 days in office.

“In the next two weeks President William Ruto will unveil a task force to review your (officers) terms of service and condition and that task force will follow the bottom-up approach. It will start listening to the constables, corporals, sergeants, senior sergeants, Inspectors all the way to the Inspector General of Police,” DP Gachagua said.

Moreover, the DP stated that the task force will also listen to the views of officers from the Prisons service and all other disciplined services in the Country.

“Once we are through listening to the officers, you must allow us also to listen to the people of Kenya because they also have certain things, they want you to do differently,” Gachagua noted.

Also Read: Gachagua Says the Govt’ will Not Interfere in Judicial Rulings

Furthermore, the deputy president stated that they are looking forward to having recommendations which are good and will hold the officers’ dignity, pay them well, give them decent accommodation and allow them to work professionally.

In addition, Gachagua stated that the government shall ensure that the security officers follow the recommendations given by the people of Kenya.

According to the DP, the task force shall move across the counties to listen to officers’ views.

At Least 2% of Fishing Gear Ends Up in the Ocean, Survey Reveals