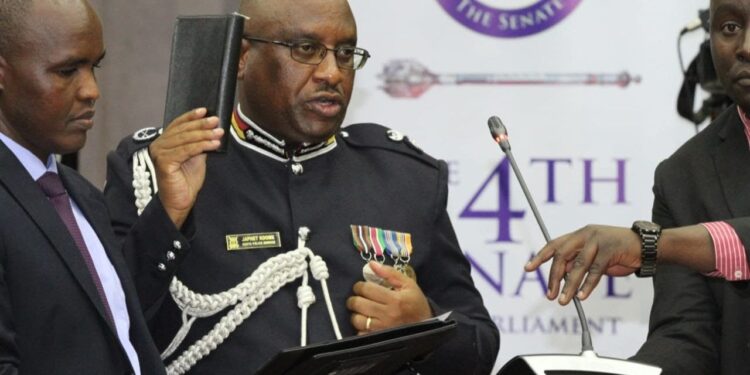 The new Inspector General (IG) of Police Japhet Koome has today refuted claims that he is related to Chief Justice Martha Koome.

While speaking at the Supreme Court on Friday, November 11 ahead of his swearing-in ceremony, Japhet Koome rubbished the claims, stating that it is only a coincidence to be sharing the name Koome with the CJ.

Moreover, in a light gesture, the Inspector General clarified that his second name is shared with the husband of the Chief Justice, Koome Kiragu.

“Once in a while, I look at the social media and I know last night there was a talk, a discourse on the socials that Koome would be sworn in by Koome. A lot of issues but interesting discussions that CJ is about wife and husband, brother and a sister… that is not the case,” he said.

“I have no blood relationship with the CJ. It is only that she is married to one Koome Kiragu and I am Koome Nchebere, I thought I should make that clear to our fellow Kenyans.” The IG added.

In addition, the Chief Justice while giving her remarks reiterated the IG’s sentiments saying that Koome as a name is popular among the Meru community, therefore ruling out any possibilities of a relationship between the two.

“Thank you for clarifying that you are not my blood relative… you should also have said that the name Koome is like Wafula, Anyango, Kamau, Mohammed… in other places. It is a name that is loved by many people. It means one who is very clever… so I hope the social media corrects that,” the CJ said.

Nonetheless, the Inspector General and the Chief Justice have cleared the air for Kenyans who went online in an uproar criticizing the Kenya Kwanza government for picking an IG related to the CJ.