by Audrey M
in News
0 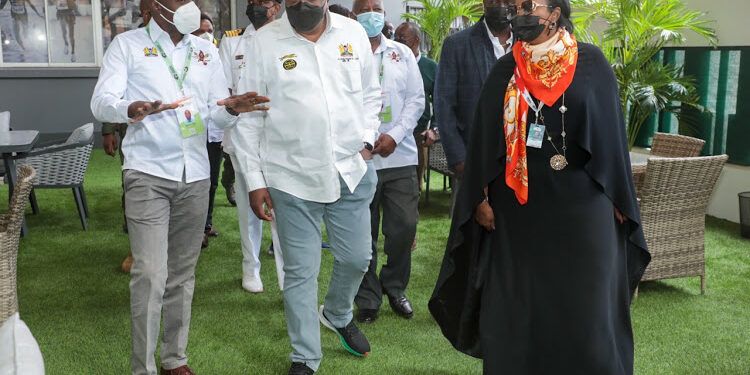 President Uhuru Kenyatta is satisfied with the 2020 World Under-20 Athletics Championships progress ahead of the event in August.

The president was a happy man as he toured the newly refurbished World Under-20 secretariat offices and Sports Arena on Thursday at the Moi International Sports Centre (MISC), Kasarani.

The Head of State was particularly impressed with the work that has been done at the infield. The secretariat has been renovated for posterity with the venue earmarked to host major events

The venue will host the world junior event from August 17 to 22 this year. Kenya has also put in a bid to host the 2025 World Athletics Championships with Moi Stadium as the preferred venue.

The president was received at the secretariat by the Sports Cabinet Secretary, Amina Mohamed, the 2020 World Under-20 Local Organising Committee (LOC) chairman Jack Tuwei and the event’s chief executive officer, Mike Rabar.

Rabar said the offices will provide an environment to support the ongoing preparations for the event that has so far attracted 128 countries.

“The President was happy about the progress made and wants all government offices for special projects to use the World Under-20 offices for benchmarking,” said Rabar.

The Kip Keino Classic, an event in the World Athletics Continental Gold Tour, might be moved from Nyayo Stadium to Kasarani if elevated to Diamond League status.

Rabar hinted that a huge dome to be used as a Media Centre for the world Under-20 event will be constructed outside the secretariat.

“The space we had at the secretariat wasn’t enough for a Media Centre considering we need to keep social distance because of Covid-19,” said Rabar. “We want to keep it as close as possible to the finish-line and mixed zone.”