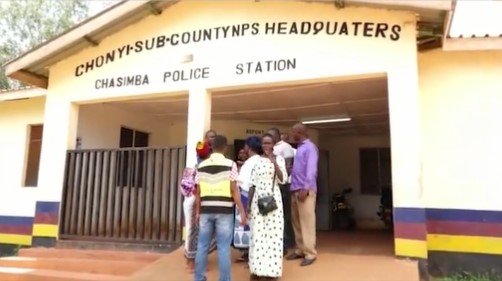 A family in Chonyi, Kilifi County is reeling in tears and shock after they were informed by police that their kin, Isaack Lewa hanged himself in a police cell using his underwear.

In video footage seen by The Kenya Times, family members of the 42-year-old deceased man can be seen seeking clues from the empty cell where Lewa reportedly took his own life.

According to Pauline Akinyi, the wife of the deceased, her late husband’s body had injuries on the back when it was retrieved from the cell, something she says was odd for one who had just taken his life.

“When I got to Chasimba police Station I met two police officers. I begged them to let me talk to my husband. The officers began taking me in circles, telling me that my husband is a most wanted man because he has committed many crimes,” a teary Akinyi said.

Akinyi further said that she told the two policemen manning the cells that all she wanted was to see her husband.

“They told me that my husband was about to be fetched by police from Kongowea. Then one of the two officers walked out and when I insisted on asking to see my husband, the officer who was with me inside the police station told me to follow his colleague who had just walked out and find out from him,” Akinyi said.

The mother of two says she run out of the police station and begged the other officer to let her talk to her husband.

“Instead of giving me a direct answer, he (the officer she had run out to meet) told me to go back to the police station and ask his colleague,” Akinyi said.

Upon returning to the police station, Akinyi was finally let inside the cell where her husband was being held.

The mother of one says once inside the cell, she found her husband lying on his side with his left arm tightly held around the neck.

“His eyes were open and he had foam coming out of his mouth. I shook him but he wasn’t responsive. I tried to exert pressure on his chest, but he was still responding. That’s when I knew that my husband was dead,” Akinyi said.

She adds that while attempting to straighten her husband’s left hand, the police officer came back and with his help they released the tightly held arm from Lewa’s neck upon which they discovered that boxer shorts were tied around the neck.

Kalonzo Says Supporting Raila Was the Right Thing to do

Tunisians Dream of Moving to Germany as Crisis Bites