Salim Lone: “Mike Sonko misled Kenyans in claiming I was his source regarding news of Mr. Njonjo’s ‘passing'” 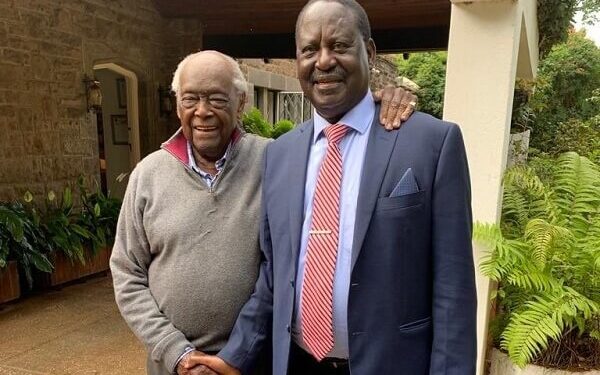 Salim Lone released a statement dismissing Mike Sonko’s claim that he was the source of information regarding the former AG, Mr. Njonjo’s passing.

Mike Sonko’s allegations
Sonko took to Twitter to apologize to the family and all, after alleging that he had received this information from Salim.

“There are lots of issues to discuss in the false news that circulated about Mr. Charles Njonjo’s “passing.” But let me first point out that Mr. Mike Sonko erred in telling the Njonjo family that I was his source of his going public about Mr. Njonjo’s “death,” as he claimed in his K24 interview.

Before I posted my erroneous story, which I had linked to a Kenyan news site which was one of my many sources, I had already read on the internet that Mr. Sonko was among those had spoken of Mr. Njonjo passing.

So, while I know many were indeed misled by my post, Mr. Sonko was not among them. Why Mr. Sonko chose to blame me was odd as he should have known I would rebut it.
I am not saying this to merely correct the record concerning my own propagation of this grossly erroneous claim that a pivotal figure in our history had died. Fake news is an inflammatory and still growing political weapon which can tear apart communities and nations.

But often it is very difficult to trace down the origin of such falsehoods when they are politically explosive as thousands repeat it on various platforms.
But exploring the origin of this fake news on Mr. Njonjo should be relatively easy as I myself saw only a few news sites (plus Mr. Njonjo’s Wikipedia page) had carried news this news. A friend fortunately alerted me very shortly to my blunder, so I repudiated/deleted my post immediately, I believe I was the first one to do so and posted a profoundly felt apology. That got over five hundred responses, attesting to the interest in this story.

So, the paper trail of the posting is a small one. In addition, there seems to have been no malicious intent behind declaring Mr. Njonjo dead. That was one reason I and others wrongly gave credence to it. That should permit all those who posted the story to publicly narrate how they came upon it to begin with.

Another reason for me was that I live in dread of Mr. Njonjo dying given his age, it will be a hugely painful moment for me because I have a deep affection for him and his remarkable evolution and contribution. I am fully aware that I and even those much younger than me could pass on long before Mr. Njonjo, may God give him continued good health.

I am hoping that one of our enterprising journalists, if not a media house, will pursue this story and narrate how it got started. It will be huge service for more truthful reporting on social media – a much needed corrective.

More generally, our major media needs to make de-bunking false Kenyan stories a priority, especially in cases which are relatively straight forward to pin down.

That none of our media chose to correct this story online points to a related weakness in Kenyan media. As a journalist wrote to me, the proliferation of news on social media as the primary source of political discussion is in part due to our major media being “depressingly careful to report on things; that’s why there’s very little to show about breaking news by big media; most the time they do catch up with citizen journalism. Any of our major media could have debunked this terrible story right away.”

We know that “news” of Mr. Njonjo’s passing circulated for hours before it was corrected by our major media. Mr. Njonjo is a pivotal figure in the making of our history and our nation, and I believe he is the only living member of the original 1963 Jomo Kenyatta cabinet. Mr. Mwai Kibaki joined the cabinet later.

I look forward to media friends raising this issue within their own news organizations, and of course on social media.”

Kenya Media’s role in fact checking stories
Given the dangers misinformation poses to both democracy and public health, many believe media platforms have a responsibility to monitor and correct misinformation before it spreads, and our Kenyan Main-Stream Media (KMSM) has shown bias in fact-checking or reporting on stories that touch at the heart of people.

Does fact-checking work, and what role should media platforms play in combating misinformation?

Well, it turns out there is evidence that fact checks do work. Numerous studies have demonstrated that when confronted with a correction, a significant share of people do, in fact, update their beliefs.

Political scientists Ethan Porter and Thomas J. Wood conducted an exhaustive battery of surveys on fact-checking, across more than 10,000 participants and 13 studies that covered a range of political, economic, and scientific topics.

So, despite a few studies suggesting that fact checks may make misinformation more prevalent (most prominently a widely-cited paper from political scientists Brendan Nyhan and Jason Reifler in 2010, which popularized the concept of the “backfire effect”), the overwhelming majority of studies have found that fact checks do work — or at the very least, do no harm.

Still, some pieces of misinformation are harder to fight than others and that is why each media organization, and its journalists need to have a fact-checking standard of disseminating news.

Liverpool Edge Villa To Bounce Back In Title Race