The Good, The Bad and The Ugly of Ruto’s 114 Days in Office 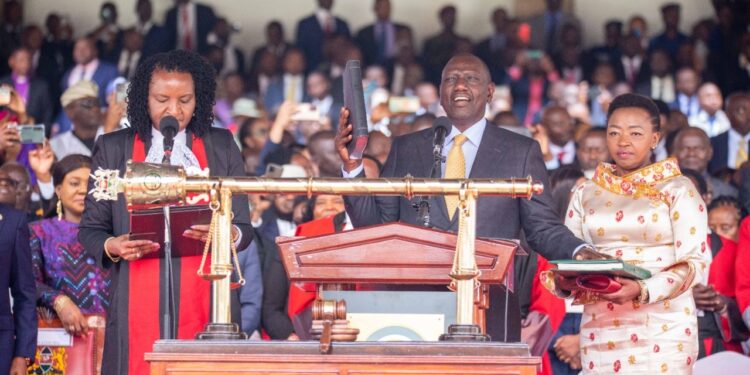 As Kenyans await President William Ruto’s Wednesday, January 4 address to the nation, we look at the good, the bad and the ugly of his 114 days in office.

The President’s address to the nation will be broadcasted live on TV and radio across the country at 7 pm and 9 pm.

His address to the nation comes just a day before the Head of State and his Cabinet set out to Nanyuki on Thursday, January 5 for a five-day retreat.

Confirming that the retreat is indeed going to take place, State House Press Secretary Emmanuel Talam said the agenda on the table is to adopt the administration’s economic transformation plan based on priorities such as food security and job creation.

As we take a look at Ruto’s 114 days in office, it’s critical to note that the cost of living has increased, characterised by high food and fuel prices among other difficulties Kenyans are facing.

According to a report by Infotrak, Ruto is said to have performed average during his first 100 days in office.

The President is credited by Kenyans as having done well, attracting a 56 per cent score for the establishment of the hustler fund.

Ruto also received a pat on his back after he secured an increased amount of funding totalling 2.146 dollars from the International Monetary Fund (IMF) for development purposes.

on Tuesday, January 3, Kenyans say the President did good work in ensuring there is food security in Kenya when he revoked the intended subdivision of the Glana Kulalu irrigation project.

The head of state said the 10,000 acres will instead be worked on to produce maize, beginning February 2023.

“After an extensive tour, with county/Gok leaders, of Galana/Kulalu national food security project today, I direct as follows: the planned subdivision into settlement parcels is revoked/cancelled: private/Gok(NIA) PPP to work on the ready 10,000 to produce starting with maize in February,” Ruto said.

He added that the land will be used to prepare for maize production under the Public-Private-Partnership in the next six months.

During this period, the government will construct a dam to help with the irrigation of more land, the President directed.

“The next 10,000 acres be prepared for production in 6 months under PPP: GoK to construct a dam beginning April to bring another 350,000 acres under production: Gok to work out a model for PPP food production in the 350k acres to be ready in 6 months. All actors are to execute timeously.”

The Galana Kulala project has been facing challenges with the Agricultural Development Corporation (ADC) stating that powerful individuals were making use of thousands of acres of the land while others were selling parcels of it to unsuspecting buyers.

According to Infotrak, Ruto is also credited with fulfilling nine of his 12 pledges made during his swearing-in to office.

These include: returning port operations to Mombasa, appointing six judges rejected by his predecessor Uhuru Kenyatta, setting up the Hustler Fund, allocating additional money to devolved governments and reforming institutions involved in justice, law and order.

The President also earned an above-average score on the establishment of a women’s rights agency in his office, increasing the collection of taxes through the use of technology, implementing the two-thirds gender rule and ensuring the fair appointment of women to senior public positions.

On the lower side, President Ruto has been criticised for doing away with the subsidies on fuel, food and electricity.

Stating that the direction he took was necessary, Ruto explained that the previous government’s introduction of the subsidies was driven by political expediency rather than the needs of the economy.

“We have to do away with those subsidies or they would cost our economy big time,” Ruto said. “We did away with the subsidies in August and I am happy that we have saved our economy a huge amount of money and we are now well on the way to making sure that we are investing in areas that will drive our economy in a sustainable way.”

After revealing his plan to scrab HELB, the President’s proposal was met with mixed reactions from Kenyans.

Ruto who was speaking in Mombasa said he plans to merge HELB, TVET, and University Funding Board to establish the National Skill and Funding Council.

Ruto said that this plan will double the current HELB funding from Ksh11 billion to Ksh22 billion and even eliminate HELB loan interests.

“We know many universities are facing numerous challenges and significant debts as a result of the programme’s length,” Ruto said.

However, university stakeholders opposed the proposal to merge HELB and UFB in November 2022.

Led by Embakasi East MP Babu Owino, the vocal lawmaker who was also a university leader said university students depended on the funds to study, adding that they need the education to better their future.

“Ruto, Helb wachana nayo Kabisa. (Ruto leave HELB alone). Comrades are poor and only education will save them from the york of poverty,” Owino said.

In his view, University of Nairobi Student Association (UNSA) chairperson Melvin Thogo said the plan will not be a solution to the funding crisis in universities.

“While this may look attractive at face value, this is the easiest way to disenfranchise students of this fund,” Thogo said.

On the ugly side, Ruto is accused of going back on his word and settling scores with government officials who opposed his presidential bid.

Top on the list of the government officials Ruto is accused of settling scores with are Juliana Cherera, Justus Nyagaya, Irene Masit and Francis Wanderi the former four Independent Electoral and Boundaries Commissioners (IEBC) who resigned from office in December.

The four finally resigned from office after the report by Parliament’s Justice and Legal Affairs Committee (JLAC) stated that there was sufficient evidence of a serious violation of the constitution, gross misconduct and incompetence that paved way for President William Ruto to form a tribunal for their removal from office.

The second batch of government officials Ruto reshuffled or kicked out of office were County and Regional Administrators.

Lawmakers in the Kenya Kwanza Coalition had presented names of some of the legislators they wanted out of office for supporting Raila Odinga and his Azimio la Umoja One Kenya Alliance coalition.

The lawmakers complained that some of the administrators frustrated them when they were campaigning.

In the latest changes, Ms Anne Ng’etich, currently serving as the secretary in charge of Administration in the State Department of Lands and Physical Planning, was named the new Interior Principal Administrative Secretary, replacing Mr Moffat Kangi.

Some of the officials the MPs are said to have trained their guns on in the retreat were Rift Valley regional commissioner Maalim Mohamed as well as county commissioners Mr Namulen (Wajir), Samson Ojwang (Trans Nzoia), Stephen Kihara (Uasin Gishu, and later Meru), and Erastus Mbui of Nakuru.

Belgut MP Nelson Koech, a senior member of President Ruto’s inner circle, yesterday told Nation that the reshuffle has vindicated the legislators who had asked for the restructuring of the officials, noting that the move is a message to those in the lower cadres.

“One of the promises by which President Ruto came to office was reorienting the provincial administration to be more focused on facilitating service delivery to Kenyans rather than running political errands.”

“This change inevitably had to begin at the top for those at the lower echelons to get the message. It is refreshing to see the journey of reimagining the role of this important cadre of public service has begun in earnest. I applaud the CS Interior Prof Kithure Kindiki for taking the bold step and I thank the President for being humane enough to host the regional commissioners and inform them of the upcoming changes in time. Of course, those of us who made appeals for the recall stand vindicated because it is the right thing to do,” said Mr Koech, who is also the chairperson of the Defence, Intelligence and Foreign Relations Committee.

After Peace Deal, Orthodox Ethiopians Keep a Christmas of Hope

US voices alarm as Tigray rebels push ahead in Ethiopia