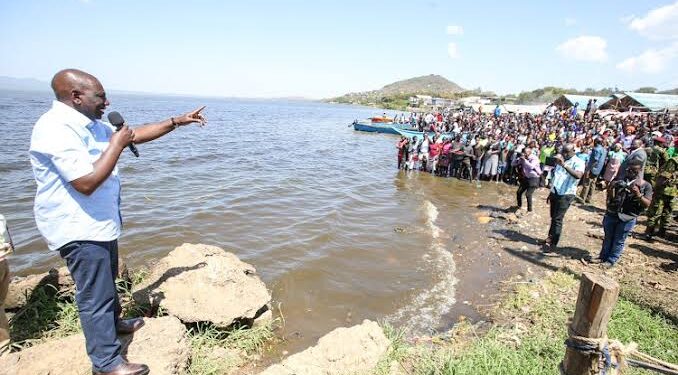 President William Ruto during his two-day tour of the Nyanza region urged resident to embrace his administration.

The president while speaking on Saturday, January 14 asked residents to work with him to foster development and economic growth of the lakeside counties.

The head of state while acknowledging the August 9th voting pattern in Kisumu, Homa Bay, Siaya and Migori counties, where a large number voted for his main political rival Raila Odinga noted that political rivalry chapter had been closed and a new one on equitable development opened.

Moreover, National Assembly Speaker Moses Wetangula stated that: “I want to salute our President because since you went into office, you’ve been everywhere telling Kenyans that whether they voted for you or not, you’re the President of the Republic of Kenya and you will serve each and every one without any fear, favor or prejudice.”

While in Siaya, Governor Orengo, castigated a section of the political class that is allegedly preparing for the 2027 polls, stating that focus should be on the here and now.

“It is wrong for those of us who have been elected to talk about 2027, we should be talking about what we’re doing now. And I am happy that the President you’re here because you have assured us that your government is kicking and working in Siaya and the entire Republic of Kenya, not because of 2027, but because that is the duty you were elected to perform,” said Governor Orengo.

The Siaya Governor’s sentiments were shared by President Ruto who urged Nyanza leaders, and all others across the board, to work with him in the present and avoid laying their baskets on a presumed next government.

Governor Orengo further asked the head of state to sit and have a talk with Azimio la Umoja One Kenya leader Raila Odinga.

“Mr President, I ask you in the spirit, not of the handshake, but in the spirit of togetherness, to sit together on the table with your brother Raila Odinga, because the elections are over,” He added.

Likewise, the head of state noted that Kenya is a united nation and as such all leaders must eliminate any barriers towards any Kenyan exercising their right to be part of the country.

Nevertheless, other than CS Owalo, other top government officials from the region were paraded, among them Interior Principal Secretary Dr. Raymond Omollo and his Trade counterpart Alfred Kombudo.

Similarly, from Nyanza Region, the President heads to Bomet County where he will attend an interdenominational thanksgiving Sunday service.