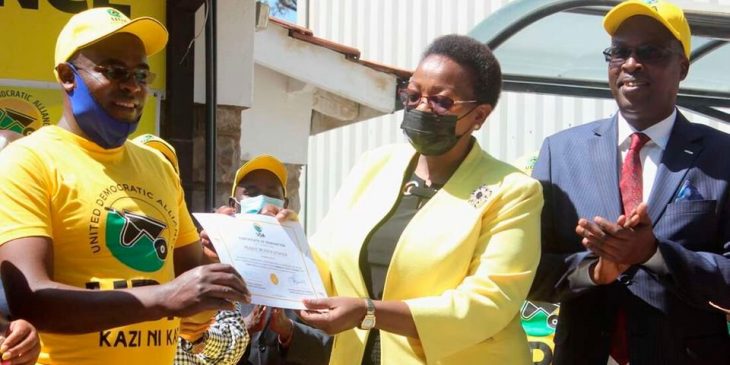 983
SHARES
3.5k
VIEWS
Share on FacebookShare on TwitterShare on WhatsApp

The United Democratic Party has claimed that some of its agents in the ongoing by-election of Rurii Ward in Nyandarua County have been arrested by the police.

On Tuesday, UDA secretary-general Veronica Maina said that Brian Mbugua and Daniel Githinji who are agents of the party were arrested by the police in the morning outside Rurii Polytechnic and taken to Ol Kalou Police Station.

Veronica added that the party agents have been harassed and intimidated by the police across the ward.

She added that police have mounted unnecessary roadblocks across the ward, which she said will intimidate voters.

The party has asked IEBC to take note of the intimidations and condemn them.

Further, the party has asked voters in the ward not to be intimidated and come out in large numbers to vote.

The battle is between the ruling party Jubilee being represented by Peter Thinji and UDA allied to the Deputy President William Ruto represented by Francis Muraya.

The seat fell vacant in January following the death of area County Representative John Mburu popularly referred to as Wamaria after a long battle with cancer.

Wamaria’s personal Assistant, Isaac Nderi, who is vying on a Maendeleo Chap Chap ticket, is among several other candidates seeking to fill the gap.

The others are Susan Wangeci Wamunga of The New Democrats (TND), Peter Gathika of the Democratic Party (DP), and Gabriel Gitome (independent).

President Kenyatta: Africa Should Invest More in Her Intermediary Cities