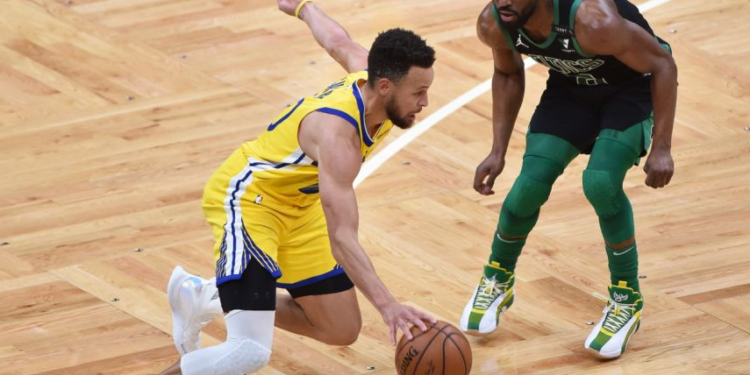 857
SHARES
1.5k
VIEWS
Share on FacebookShare on TwitterShare on WhatsApp

Kemba Walker nailed a clutch three pointer with 24 seconds to go as Tatum posted his second highest career scoring total for the Celtics, who won their sixth straight.

“Everybody is contributing,” said Tatum. “That is what it is going to take to win games. We gonna be alright.

The Celtics tried but failed to stop Curry who now has scored 32 or more points in each of his last 10 games. He had been averaging over 40 points in the Warriors’ four game win streak which was snapped Saturday.

“I am in awe of what I watched tonight,” said Warriors coach Steve Kerr.

“It felt like a playoff game. Both teams were just gassed. It was just incredible shot making from Steph and Jayson.”

Two time league MVP Curry nailed a three pointer to cut the Celtics lead to just two with 19 second left in the fourth but the Celtics still beat the Warriors for the fifth consecutive time.

Andrew Wiggins scored 22 points and Draymond Green had 10 rebounds for the Warriors, who led by as many as 16 points in the second quarter before Boston went on a 21-2 run to take the lead in the third.

The Warriors got a scare in the fourth when Curry turned his ankle while battling for the ball in the middle of the court. He eventually got up and shook it off.

It was not that easy for Golden State’s Juan Toscano-Anderson who let his youthful enthusiasm get the better of him when he tried to chase down a loose ball and went crashing over the courtside scorers’ table.

Toscano-Anderson landed heavily on the floor, taking out some folding chairs and several computer monitors which then cascaded down upon him.

He stayed on the ground for a couple of minutes before being helped to his feet and then escorted to the dressing room holding a towel to the side of his head.

“That’s a competitor,” Kerr said. “Juan is a guy you want that guy on your team. That’s all.”

Elsewhere, Grayson Allen scored 26 points and drained a career high seven threes to lead the Memphis Grizzlies to a 128-115 victory over the Milwaukee Bucks.

Giannis Antetokounmpo, playing in his second game back after an injury rest, finished with 28 points, 11 rebounds and eight assists for Milwaukee, which dropped its fourth straight home game.

Ish Smith came off the bench to deliver 16 points and five assists, while Russell Westbrook once again had a triple-double with 15 points, 14 rebounds and 11 assists for the Wizards, who have also won six of their last seven contests.

Robin Lopez added 15 points and five rebounds as Washington, who lost Rui Hachimura in the third quarter with a strained knee.

Isaiah Stewart scored a career-high 19 points and grabbed 12 rebounds for the Pistons.