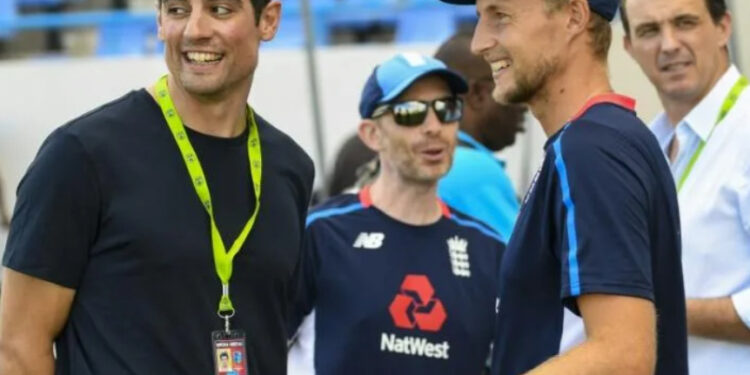 England great Alastair Cook delivered a stinging rebuke to the current team’s batsmen by saying they “can’t handle” the pressure of Test cricket as they suffered a humiliating series loss to New Zealand at Edgbaston on Sunday.

New Zealand won a two-match contest 1-0, taking just 11 overs and 52 minutes’ playing time on the fourth day to complete a convincing eight-wicket win in the second Test after being set a meagre target of 38.

Tailender Olly Stone was out to the very first ball of Sunday’s fourth day but by then the damage had long since been done, with England resuming on their overnight 122-9.

That actually represented a recovery after they had subsided to 76-7 in their second innings inside 27 overs on Saturday.

Although Joe Root, Cook’s successor as England captain, boasts an impressive Test average of 48.68, the next best in his side belongs to opener Rory Burns, with 33.23 — a worrying sign ahead of their bid to regain the Ashes in Australia later this year.

Meanwhile, the form of batsmen Dom Sibley, Zak Crawley and Ollie Pope remains a concern, not least to Essex opener Cook, who retired from Test duty in 2018 as England’s leading scorer with 12,472 runs at 45.35 including 33 hundreds.

“From what I’ve seen of this batting line-up, when the pressure comes on, the intensity of Test cricket, the scrutiny of it, they can’t handle it,” said Cook while commentating for BBC Radio’s Test Match Special on Sunday.

“They have quirky techniques, but they’ve scored a lot of runs in county cricket and at times scored Test runs.

“When the pressure comes, they are not handling the mental pressure that you need to do,” he added.

“It is a massive area of concern for me.”

Outplayed
Sunday’s defeat, which followed a draw at Lord’s, meant England had lost a home Test series for the first time since a 1-0 reverse against Sri Lanka in 2014.

But Root, ahead of a five-match series at home to India — who face New Zealand in next week’s inaugural World Test Championship final at Southampton — warned against wholesale changes.

“It would be the wrong time to start panicking and rip up all the hard work we have done for such a long period of time,” he said.

He added: “We’ve been outplayed in all three departments and particularly the batting.”

England entered this match amid the off-field furore caused by the suspension of Ollie Robinson for historic racist and sexist Twitter posts.

Root, however, insisted: “I don’t think that dripped into the way we played, and it would be a bit of an excuse, to be honest.”

England, already without the injured Ben Stokes and Jofra Archer, rested Jos Buttler, Chris Woakes, Jonny Bairstow and Moeen Ali from this series after their return from the Indian Premier League.

Rest and rotation, initially a response to the pressures of ‘bubble’ life amid the coronavirus pandemic, has been a feature of England selection for more than a year.

England coach Chris Silverwood, now in sole charge of picking the side after the abolition of Ed Smith’s post as national selector, has repeatedly defended the policy.

But England, beaten 3-1 in India earlier this year, appear to be nowhere near good enough to avoid selecting their best-available team.

“That’s out of my hands, to a degree,” said Root. “In terms of having our best XI, I’d like to think that if we are all fit and ready that will be the case for the five Test matches against India.”