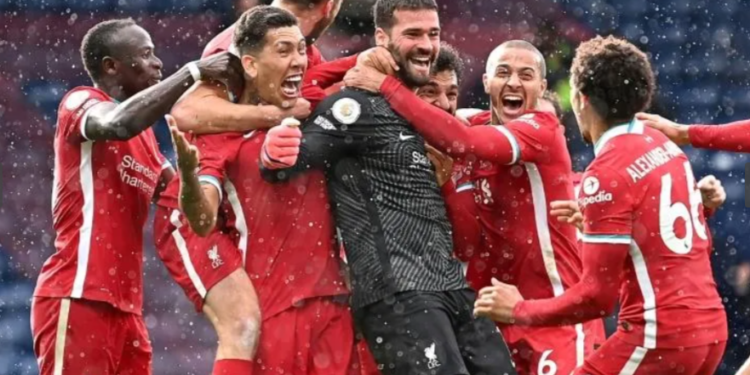 Liverpool goalkeeper Alisson’s dramatic 95th-minute goal saw the Reds to a 2-1 victory at West Bromwich Albion on Sunday which maintained their bid to play in the Champions League.

Liverpool moved to within a point of fourth-placed Chelsea and three behind Leicester with two league games left to play this season thanks to Alisson’s late header.

With Leicester and Chelsea still to face off in a repeat of the FA Cup final, won 1-0 by the Foxes on Saturday, victories over Burnley and Crystal Palace will take Liverpool into the top four.

The already-relegated Baggies took an early lead through Hal Robson-Kanu before the in-form Mohamed Salah equalized before half-time.

But Liverpool were still heading for a damaging draw when Alisson headed in from a corner in the fifth minute of stoppage-time.

Already-crowned Premier League champions Manchester City and Chelsea will contest this season’s Champions League final in Porto on May 29.

But if Chelsea remain in the top four there won’t be an additional Champions League place given to the fifth-placed side in the Premier League.

Liverpool were stunned when Robson-Kanu, making his first league start of the season for Albion, put the hosts ahead in the 15th minute after he ran onto Matheus Pereira’s pass and found the bottom corner at the Hawthorns.

But Liverpool levelled when Sadio Mane, starting in place of the injured Diogo Jota, intercepted a loose pass to Kyle Bartley, with the ball then falling to Salah, whot hit a first-time shot into the bottom left corner.

The Egypt striker’s 22nd Premier League goal of the season saw him draw level with Harry Kane in the race for the English top-flight’s golden boot award.

Spurs stay in European hunt
Meanwhile Tottenham Hotspur moved into sixth place, on goal difference from West Ham, after a 2-0 win at home to Wolves.

England captain Kane fired Spurs ahead on the stroke of half-time by curling the ball into the corner of the net after Pierre-Emile Hojbjerg’s through ball behind the defense.

Hojbjerg made it 2-0 just after the hour when he followed up Gareth Bale’s shot and tapped the ball in after goalkeeper Rui Patricio could only parry as Spurs bolstered their hopes of at least playing Europa League football next season.

“We controlled the game.”

“This is Tottenham Hotspur. We want to be playing in the biggest competition in the biggest games. This season hasn’t gone to plan,” added Mason, appointed after Spurs sacked Jose Mourinho.

Eighth-placed Everton, Liverpool’s local rivals, are at home to bottom of the table Sheffield United in the day’s concluding Premier League match.

John McGinn put Villa ahead in the 17th minute at Selhurst Park before Christian Benteke equalised against his former club with a 32nd-minute header.

The Eagles, however, equalized for a second time in the 76th minute when Wilfried Zaha grabbed his 11th goal of the season with a shot deflected in off Ahmed Elmohamady.

The comeback was complete in the 84th minute when the 21-year-old Mitchell followed-up from close range after team-mate Eberechi Eze had miscued in a victory that lifted Palace to 13th place.