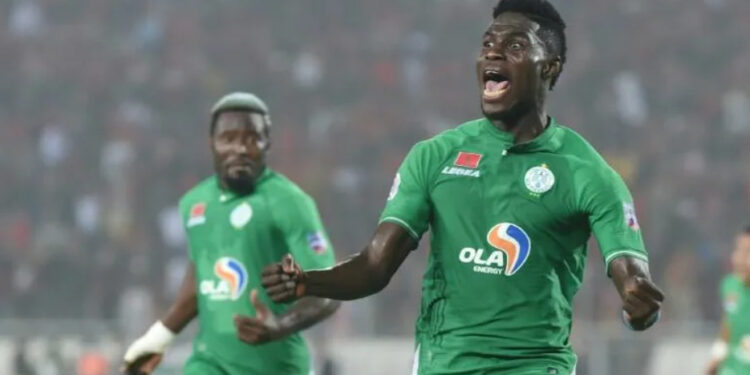 All the goals came within 36 minutes of the kickoff as seven-time CAF title winners Raja cruised into the semi-finals 5-1 on aggregate after a 1-1 stalemate in Soweto last Sunday.

The 2018 Confederation Cup winners will face 2020 runners-up Pyramids of Egypt during June for a place in the final with Coton Sport of Cameroon meeting JS Kabylie of Algeria in the other tie.

Both match-ups are repeats of group games that produced home and away victories for Raja and Kabylie, whose last of six CAF titles came 19 years ago.

A combination of clinical Raja finishing and woeful Pirates defending turned the much anticipated second leg of the quarter-final into a Casablanca cruise for the hosts.

Malango nodded the first goal on seven minutes and Zakaria el Wardi scored his first in Africa this season off a cross to double the lead.

Soufiane Rahimi sprinted clear and chipped the ball over goalkeeper Wayne Sandilands for the third and Malango also scored off a chip to complete the rout with just 36 minutes gone.

Democratic Republic of Congo-born Malango is among seven players who have scored five goals in the Confederation Cup this season, one less than frontrunner Lambert Araina from Coton.

Pirates showed greater determination in the second half, but could not score even a consolation goal as they suffered a record-equaling away loss in a CAF competition.

Timid exit
Enyimba of Nigeria were another club who could not match north African opponents and made a timid exit after failing to mount a second-leg comeback following shambolic defending away to Pyramids last Sunday.

Trailing 4-1 from the first leg, Enyimba fell further behind on aggregate when Ibrahim Adel struck on 32 minutes in southeastern city Aba.

Anayo Iwuala, who missed the trip to Egypt because of suspension, equalized on 40 minutes and the second half petered out to a 1-1 draw, giving the Cairo club a 5-2 aggregate victory.

Jaraaf of Senegal came from behind to defeat Coton 2-1 in Thies, but were eliminated on away goals after losing 1-0 in Garoua.

Sibiri Sanou scored his third goal for Coton in the African equivalent of the UEFA Europa League midway through the first half to leave the home side needing at least three to qualify.

Albert Diene levelled before half-time and Pape N’Diaye got a second goal for the Senegalese 10 minutes into the second half, but they could not beat goalkeeper Narcisse Nlend again.

Although Kabylie were held 1-1 at home by record three-time Confederation Cup winners CS Sfaxien of Tunisia they advanced 2-1 on aggregate in a tie where all the goals came from penalties.

In the second leg, Kabylie captain Rehda Bensayah converted a spot-kick before half-time in Tizi Ouzou and Aymen Harzi equalized from a penalty with nine minutes remaining.