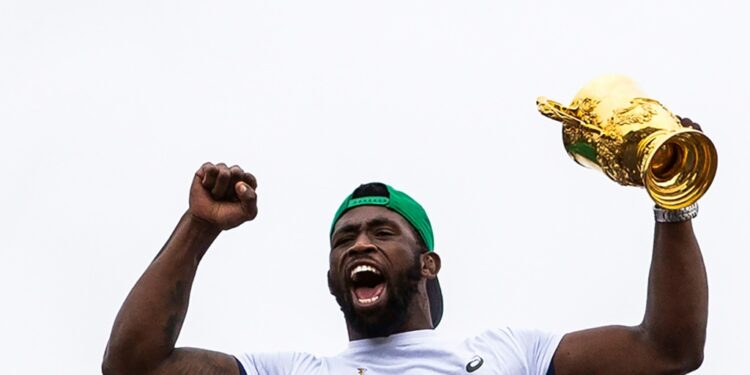 South Africa’s 2019 Rugby World Cup-winning captain Siya Kolisi signed for Top 14 side Racing 92 on Tuesday and will join them after the Springbok defence of their title later this year.

“I am really enthusiastic at the idea of joining Racing 92 after the World Cup,” said Kolisi in a club statement.

“It is a club with a vision which I have always admired.

“Racing 92 has big ambitions on the pitch and equally very encouraging social affair projects which correspond to my values and personal goals.”

He will join Racing after the completion of the September 8-October 28 Rugby World Cup in France and team up with several other Springboks at the Parisian club.

“His record of winning and his natural leadership makes him a superb player as well as an outstanding human being.”

Kolisi has been granted an initial release from his Sharks contract.

“His move to France is a new and exciting opportunity, and we could not be happier for him,” said Sharks’ chief executive Eduard Coetzee.

“We are blessed to have him don the black and white jersey, and we know that over the next few months, he will continue to give back to the team and our fans.

“Siya has been an instrumental and much-loved member of the Sharks family since his arrival two years ago.

“His well-documented and commendable leadership qualities extend far beyond the playing field… as well as his commitment in the expansion of the Sharks brand to a global market.”

Kolisi, who joined the Sharks from the Stormers in Cape Town, said he was “immensely appreciative that the Sharks have given me their blessing to make this move”.

Kolisi become the first black Test skipper of the Springboks — a team reserved for whites during apartheid — when he led them against England in a 2018 Test.

A match that began disastrously for the home team, as they fell 24-3 behind, ended joyously as they triumphed 42-39 at Ellis Park in Johannesburg.

South Africa faced England again one year later in the World Cup final and Kolisi led the men in green and gold to a 32-12 victory in Yokohama.

He had an outstanding 2022 season for the reigning world champions, playing in 12 of 13 Tests, raising his international appearances to seventy-five.

Reviewing 2022 for South African sportsmen, the Johannesburg Sunday Times listed the loose forward among the top twenty for his “tireless toil”.

“Kolisi has delivered a rugged edge at the breakdown. He creates chaos in the collisions, which has helped make the Springboks a more potent force,” noted the weekly.

Lorenzetti will hope Kolisi’s leadership propels Racing to their first trophy since winning the sixth of their league titles in 2016.

They have struggled in the European Champions Cup, however, losing heavily at home to Leinster, and narrowly away to Harlequins last month.

In the same competition, the Sharks beat Harlequins at home and then achieved a significant away victory over Bordeaux-Begles, who they host next weekend.

Locations Where the Public Can Submit Views on CBC