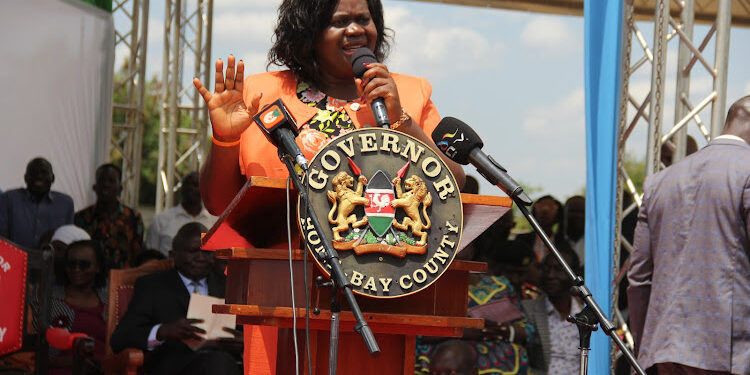 The lakeside county has hired Price Waterhouse Coopers to conduct the auditing process.

This exercise is expected to expose people who have been earning money from the county coffers without working.

Moreover, officials from the Price Waterhouse Coopers have already arrived in Homa Bay county and were expected to start the audit process after the swearing-in of county secretary Bernard Muok.

Likewise, Homa Bay County Governor Gladys Wanga held a meeting with the audit firm officials together with others from the Salaries and Remuneration Commission.

During the meeting, the parties discussed how they would clean up the county government payroll and personnel census audit can be conducted.

“Homa Bay spends much of its Sh7.8 billion budget on wages and recurrent expenditure. To improve service delivery, we must streamline all our systems,” Wanga stated.

The governor further asked all staff members to participate.

Similarly, Gladys Wanga has directed the new county secretary to guide the auditors from one department to another as they undertake the exercise.

“Let’s avail ourselves and the necessary documents to the audit team because they will be here for a month. Employees whose data will not be captured will be assumed as not part of us,” Wanga said.

Moreover, the auditors will take biometric records, personal identification numbers and appointment letters among others from the employees.

Furthermore, the deputy governor, stated that they are committed to service delivery as they pledged during campaigns and asked Muok to help them deliver.

“Homa Bay people want to see development and part of development is human resources. Ensure we have competent people who can transform the county,” Magwanga said.

Ethiopia Fractured and Fragile after Two Years of War