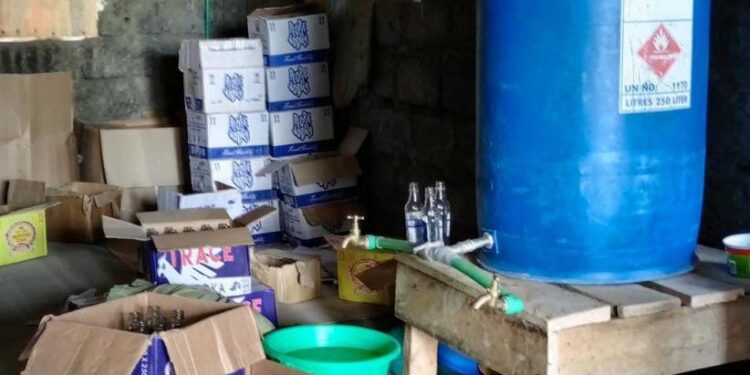 The operation conducted on Monday, January 23 led detectives to a residential property where more than 200 boxes stashed with unlicensed liquor were found.

Moreover, the Directorate of Criminal Investigations (DCI) reported that they arrested a suspect in the raid.

The suspect identified as Teresia Nyokabi Ngatia was apprehended as she was found with the boxes believed to be destined for local stores.

A consignment of counterfeit alcoholic drinks affixed with fake KRA stamps was impounded yesterday evening at a residential property in Ruai, by detectives acting on intelligence leads. Over 200 cartons containing thousands of pic.twitter.com/6Bcxp7nhLO

“The counterfeited drinks whose safety to consumers could not be immediately ascertained, were packaged in branded bottles that are popular locally including, Kane Extra, Trace Vodka, Konyagi, Blue Ice, Kibao Vodka and Chrome Vodka among others,” DCI wrote on Twitter.

Also Read: Raila Says He is Not After a Handshake

Nonetheless, the suspect is set to remain in police custody at Kamulu police station awaiting arraignment.

These operations follow a directive from President William Ruto to tame crooked businessmen who have devised new ways of evading taxation.