Raila Says He is Not After a Handshake 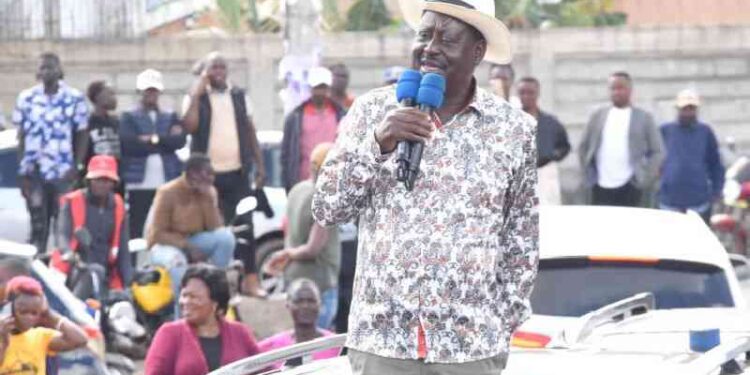 Azimio La Umoja One Kenya leader Raila Odinga while speaking at Kamukunji grounds said he is not after any form of handshake with President William Ruto.

During his speech at the Kamukunji rally on Monday, January 23, Raila indicated that he does not want any cooperation with what he termed as an ‘Illegitimate Presidency.’

“They are saying that we love demonstrations and that we want a handshake am saying here today, I don’t want anything to do with a handshake,” he stated.

Moreover, the Azimio leader’s statement came following claims by Kenya Kwanza outfit that the calls for public rallies were meant to force talks with president Ruto, a notion Odinga refuted.

Nonetheless, the head of state in a quick rejoinder hit back at Raila after he termed his presidency “illegitimate” demanding for an independent audit to expose what he described as an electoral fraud.

According to president Ruto, Raila Odinga’s sentiments and demands are schemes to blackmail him into handshake talks.

“Don’t tell us that you don’t want a handshake. We are seeing you and we know you very well,” Ruto indicated.

Likewise, the head of state warned Raila against engineering chaos though regular mass gatherings saying State organs will counter any attempt to make the county ungovernable and disrupt his administration’s economic transformation agenda.

“My friends, isn’t it time you change tactics?” he posed. “There’s no way you will outwit me. Forget about matters handshake.” Added president Ruto.

Also Read: Kerrow Says Spying on M-Pesa is an Infringement of Rights

While dismissing Odinga’s claim that his presidency is illegitimate as baseless, the head of state noted that; “Look for someone else to intimidate. I was elected by the people in broad daylight, and you lost with the so-called deep state on your side.”

Nonetheless, president Ruto noted that he will not please a clique of a few individuals at the expense of overarching national interests.

“All these demos are not in the interest of mwananchi. Government will not be blackmailed to serve the interests of a few people. We will serve the citizens regardless of political affiliations,” he asserted.

You Will Not Intimidate Me, Ruto Fires Back at Raila