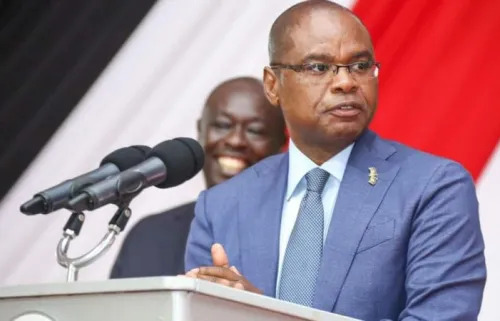 Senate Speaker Amason Kingi during a past national function.PHOTO/COURTESY.

In a statement released on Wednesday, January 18, Kingi set the special senate sitting for Thursday 19.

Kisang won the seat in a by-election held on January 5, after garnering 41,378 votes on a UDA ticket.

He defeated Tim Kipchumba of the PPD party who emerged second with 38,151 votes.

In a gazette notice on Wednesday, Senate Speaker Amason Kingi has recalled senators for a special sitting on Thursday where Kipsang will be sworn in.

“The business to be transacted at the sittings shall be the swearing-in of William Kipkemoi Kisang, the Senator-elect for Elgeyo Marakwet County and the consideration of the Independent Electoral and Boundaries Commission (Amendment) Bill, 2022 (National Assembly Bills No 49 of 2022),” Kingi said in the notice.

The Independent Electoral and Boundaries Commission (Amendment) Bill, 2022, seeks to change the composition of the IEBC selection panel.

The panel will conduct the recruitment of IEBC commissioners following the retirement and resignation of the poll agency officials.