Why IEBC Wants Headquarters Moved Out of Nairobi CBD 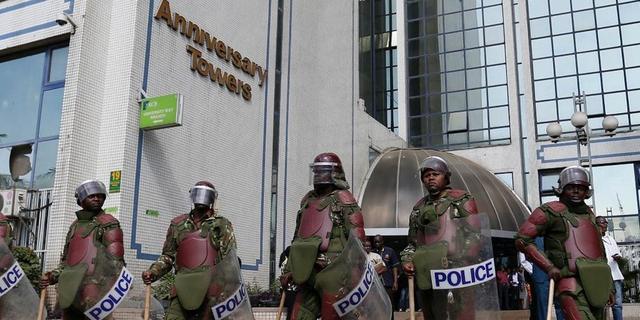 Anti-riot police officers guard Anniversary towers during a past protest by opposition leaders.Photo/Courtesy

A report by the Independent Electoral and Boundaries Commission (IEBC) says the  location of its headquarters within Nairobi Central Business District poses a security threat.

In its Post-Election Evaluation Report for the August 9, 2022 General Election, the commission says the location of its offices not only poses a threat to the commission and its staff but other tenants at the building and surrounding areas.

“Many a time there have been protests and demonstrations that not only interfere with the commission’s work, but also hamper the operations of other tenants at its current location at Anniversary Towers,” it said.

The report recommends that IEBC acquires its standalone headquarters based on a growing human resource capacity that demands for more office space .

“This will in the long run reduce the expenses spent on rent and allow the commission to diversify and establish a modern resource centre and training institution on conduct of elections,” reads the report.

Also Read: President Ruto Says There Was an Attempt to Abduct, Kill Chebukati

In May 2018, the electoral agency announced it had embarked on a process of moving its headquarters outside the Central Business District to enable it undertake its mandate effectively.

Former IEBC chairman Wafula Chebukati told the National Assembly’s Justice and Legal Affairs Committee that the commission was hoping to either buy or construct a building that will serve as its headquarters.

Chebukati said the Sh100 million spent annually on rent excludes hiring of venues for the commission’s activities such as training and meetings.