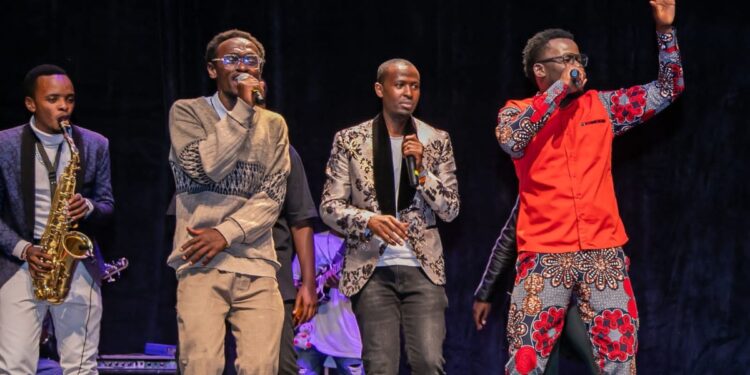 Benali and his team want to give young talented Kenyans a platform to showcase their talents. Photo: Vibe Na Benali/Original.

Kenya is a hotbed of talent, which goes without debate.

Millions of Kenyan youths have been blessed with various talents ranging from music, football, acting, and dancing, among others.

However, few are lucky to break through and become the people they wanted to be due to lack of platforms to showcase their different talents.

Having seen the immense talent in the country and the hunger to succeed in different areas in the wider entertainment industry, a Kenyan creative thought it wise to lend help in the best way possible.

The Kenya Times has learnt Churchill Show’s producer known as Benali recently launched a platform dubbed Vibe Na Benali to give the aforementioned the chance to shine and probably become big names.

Through Vibe Na Benali, the multi-talented producer, in conjunction with his team intend to scout for talents across the entire country and nurture them before introducing them to the wider market.

This writer understands Vibe Na Benali is set to make a debut on NTV, a move that will not only give selected talents much visibility but also place them before the eyes of prospective employers and sponsors.

Vibe Na Benali will be a combined act type of show incorporating comedy, music, acting, and basically anything that falls under the creative arts.

Expounding further about Vibe Na Benali, the producer in a phone interview with The Kenya Times added that the show intends to recapture the television audience which has been taken over by other online platforms.

An insider hissed to this writer that the show will have different segments such as a live show, school tours, fan surprises, and street auditions.

Benali told this publication that he thought of coming up with the show to enable the growth of different talents.

This, he disclosed will help young Kenyans who are very talented but are undiscovered, with their talents being under-utilised, something that hurts them financially.

The icing on the cake is the fact that Benali will also be empowering young Kenyans by hiring some in his production crew and other areas as interns.

It should be noted that Benali’s new show, Vibe Na Benali will also offer a safe space for women and youth with the intention of re-empowering them by giving them the fairest platform to showcase their talents.

Benali is a multi-talented artist who has worked as a sound engineer and comedy music producer for top Kenyan shows such as Churchill Show and the XYZ Show.