Yes I Do: Amber Ray Over the Moon After New Lover Kennedy Rapudo Proposed to Her 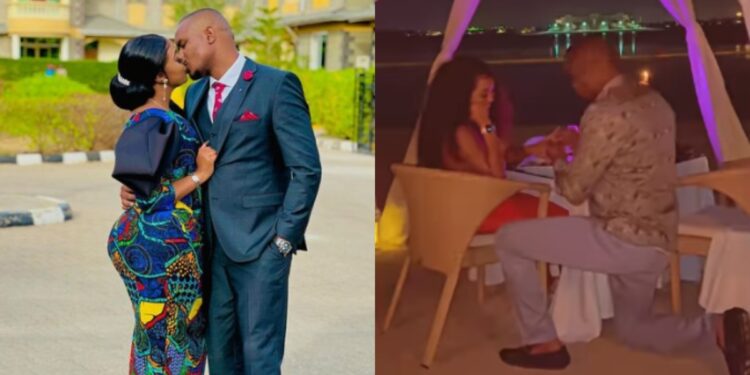 Curvaceous Kenyan socialite Amber Ray is officially off the market, The Kenya Times can authoritatively report.

The beautiful mother of one was recently engaged by her new lover Kennedy Rapudo in a scenic setting while holidaying in Dubai.

Kennedy Rapudo, who had flown Amber Ray to Dubai for her birthday vacation went down on one knee and requested for the socialite’s hand in marriage.

A love-smitten Amber Ray was excited and could not turn down the marriage proposal, and therefore let out a very big “YES!”.

News about the proposal was first made public by Amber Ray through a number of videos on her Insta-stories which showed Rapudo doing the needful.

The socialite-turned-business lady also shared a video of herself showing off the rock on her wedding finger, while enjoying a warm embrace from her lover Kennedy Rapudo.

Amber’s engagement impressed quite a number of Kenyans, mostly her fellow public figures and her fans who took to different social media platforms to congratulate her and Rapudo on the aforementioned.

The engagement came hot on the heels of an official introduction ceremony in which Amber Ray took her lover to meet her parents even as they look forward to marrying each other.

Photos from the introduction ceremony confused the public with many concluding she may have been hitched through a traditional wedding.

It should be noted Amber Ray moved on to the next one with Rapudo not long after parting ways with businessman Jimal Roho Safi.

Theirs was a hot romance until it was clouded by drama courtesy of Jimal’s first wife Amira who raised hell before finally letting go.