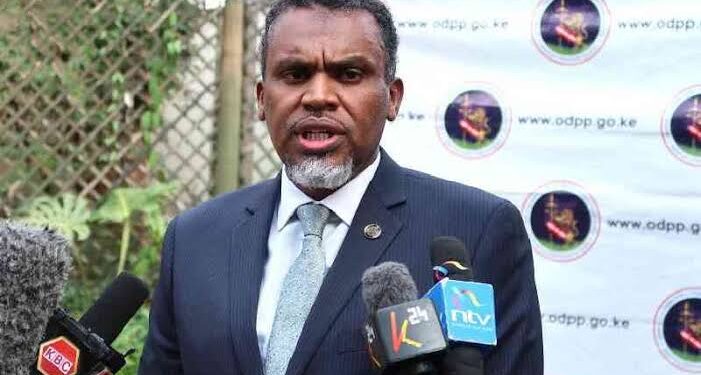 Thieves broke into the Director of Public Prosecutions Noordin Haji’s Nairobi home on Thursday, August 4, and made away with electronics.

According to the police, unknown buglers entered Haji’s home located at Nairobi’s Riverside suburb through the main gate.

The thieves then proceeded to the main house where they stole two Apple laptops, a 75-inch Samsung TV, a Sony PlayStation 4, assorted shoes, and two bags.

Moreover, the DPP and his wife were not in the house when the incident occurred.

However, Haji’s house helps and his children, were in the house at the time but none of them got wind of the situation.

In addition, the Office of the Director of Public Prosecutions (ODPP) while confirming the robbery said investigations had been launched to establish the motive.

“The DPP would like to clarify that there was a robbery at his RESIDENCE, not his OFFICE, & investigations are ongoing. The ODPP, as a Prosecuting Authority, doesn’t collect or store evidence of any nature,” ODPP tweeted on Friday, August 5.

Furthermore, the ODPP asked members of the public and media not to politicize the incident.

Nonetheless, the incident drew mixed reactions from a section of Kenyans who questioned how the thieves managed to gain access into the home that is manned by armed police officers.

Furthermore, Interior Cabinet Secretary Fred Matiangi while commenting on the incident, urged Kenyans to avoid making assumptions on the event and allow investigators establish what transpired.

Nevertheless, the thieves came a day after DPP Haji directed the Inspector General of Police Hillary Mutyambai to open investigations into an alleged telephone conversation between Azimio Secretary General Junet Mohamed and an IEBC official.

The widely circulated voice recording allegedly captured Junet Mohamed, who is also the Suna East MP, planning a meeting with a section of IEBC commissioners together with other unidentified individuals.

Furthermore, the DPP said, the remarks captured in the voice recording, and an alleged subsequent meeting may be contrary to Section 20 (2) of the Elections Offences Act, 2016 and Section 17 of the Computer Misuse and Cyber Crimes Act, 2018.

Dad Wasn’t Around For 14 Years, Frankie Now Opens Up On Troubled Childhood