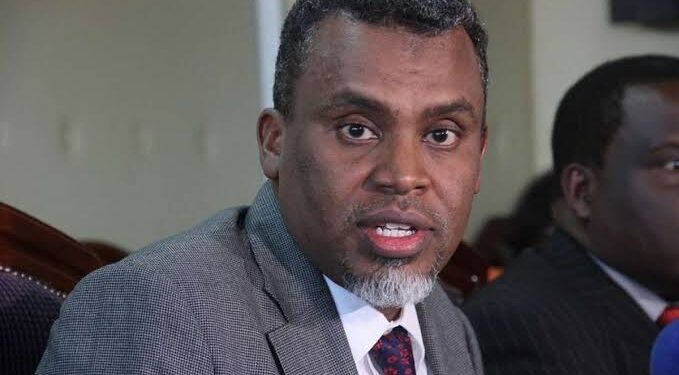 The Director of Public Prosecutions Noordin Haji has directed the Inspector General of Police Hillary Mutyambai to open an investigation into an alleged phone audio recording conversation between Suna East MP Junet Mohamed and an IEBC official.

DPP Haji said that he wants the investigation file submitted to his office within seven days.

The recording in question allegedly captured the Azimio Secretary General, planning a meeting with IEBC commissioners and other unknown individuals.

Moreover, the DPP noted that the remarks captured in the voice recording, and an alleged subsequent meeting may be contrary to Section 20 (2) of the Elections Offences Act, 2016 and Section 17 of the Computer Misuse and Cyber Crimes Act, 2018.

Also Read: Junet Dismisses Claims That He Is The Voice Behind Leaked Audio Recording

Haji on Thursday, August 4 said Junet is heard in the clip saying“…Now there is high-levelel meeting you were asking me about… I want to organize it tomorrow. At 6:00… No, 6 in the evening. We will discuss this matter and we have to come up with a solution. There is a problem there, we need to sort it out…”

“Accordingly, pursuant to Article 157 (4) of the Constitution of Kenya, 2010, you are hereby directed to undertake comprehensive investigations into the aforementioned audio recording including the source thereto, intercept, ion thereof, and transmission thereto,” stated the letter by Haji to Mutyambai.

However, Junet denied the audio terming it as fake.

The Suna East MP further regarded the audio as a desperate attempt by Azimio rivals to bring their coalition down.

“The Hon. Junet Mohamed urges the public to ignore the video, which appears to be one of the last desperate acts of a dying political campaign that has been based on years of lies, innuendoes, mudslinging, arrogance, chest-thumping, name calling,– waking up to the reality of a lost election – is on a sympathy seeking spree!” Junet Mohamed wrote on Twitter.

Nonetheless, Junet further called upon investigative agencies to look into the fake audio matter and bring to book those found culpable of the mischief.