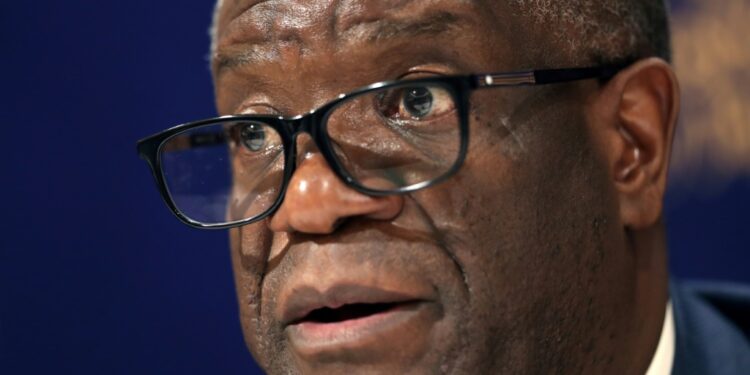 Campaigning Congolese doctor Denis Mukwege is urging his country’s government to do more to bring war criminals to justice, alleging that many offenders hold positions of power and are blocking investigations.

Mukwege, who co-won the Nobel Peace Prize in 2018, is the Democratic Republic of Congo’s best-known human rights campaigner.

He made his name treating rape victims at the Panzi Hospital in Bukavu in the country’s war-torn east.

The 66-year-old gynecologists and author, who has faced multiple assassination attempts, has long supported the idea of an international tribunal for Congo to try the people responsible for nearly three decades of atrocities and war.

“I have to be frank: I think we can do better,” he told AFP in Paris when asked if President Felix Tshisekedi’s government was doing enough to pursue militia leaders or military commanders responsible for massacres and rape.

“I do not see how we can build peace without justice,” he added.

“There have been so many crimes, and unfortunately the criminals are in senior positions in the army, in the police. They also hold political positions. And the fact that they are in these roles means they do everything to hush up the truth,” he said.

Tshisekedi came to power in 2019 after disputed elections, vowing to root out corruption and tackle militia groups.

He succeeded Joseph Kabila, whose 18-year rule saw a bid to end fighting in the east by inviting militiamen to join the army in exchange for laying down their weapons.

A landmark investigation published in 2010 by the United Nations, known as the Mapping Exercise Report, found evidence of abuses that could amount to crimes against humanity over the period of 1993 to 2003.

It pointed the finger at local armed groups, the Congolese army, as well as the soldiers of Congo’s neighbors, above all Rwanda’s, which played a key role in the Congo Wars of the late 1990s.

In an interview with AFP in May, Tshisekedi urged the international community to build on the Mapping Report, “because we need justice to be delivered to our victims.”

Violence has ravaged the country since the middle of the 1990s, fueled by competition for the country’s mineral, forest and precious metal wealth, according to Mukwege and other human rights campaigners.

The DRC and Ugandan armed forces are currently engaged in a fight against one of the deadliest armed groups currently, the Allied Democratic Forces (ADF).

The group is blamed for thousands of killings in North Kivu province and for recent bomb attacks in Uganda.

Mukwege, who met French Foreign Minister Jean-Yves Le Drian on Tuesday, called on Paris to help in the fight against the “impunity” of war criminals in his country, a former Belgian colony.

“We think that France’s involvement can make a difference: we are counting on France to help advance the issue of transitional justice,” he said.

“France knows the Congo the best out of all countries except for Belgium, which is not on the UN Security Council,” Mukwege added.

Several Congolese warlords have been tried and convicted by the International Criminal Court in the Hague, but Mukwege’s campaign for a special tribunal for his country has failed so far to gain traction internationally.

Rwandan leader Paul Kagame, a close Western ally with whom French President Emmanuel Macron has sought to forge a relationship, denies war crimes were committed by his soldiers in Congo.

Mukwege’s efforts to push for justice and his outspoken condemnation of Congolese authorities, militias, as well as Rwandan authorities, means he lives under UN protection at his hospital in South Kivu province.

Tokaaa! Kanye West Kicked Out of Skechers HQ After Storming in Uninvited, Filming