The Art and History of East African Cuisine 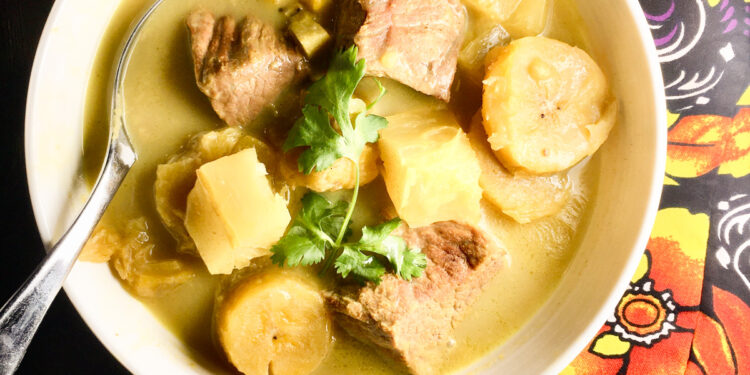 Ntrovi Ya Nazi - a stew from the Comoros

I interviewed the multi-talented Kanyi Muraguri about his numerous and varied creative pursuits that have culminated in the establishing of his blog: Kanyi’s Kitchen.

The site is dedicated to curating the cuisine of the 22 nations and territories that make up East Africa. That’s right! East Africa is way more than just Kenya, Uganda, and Tanzania.

Kanyi grew up in Kenya hearing stories about his paternal grandfather, a Kenyan who spent much of his life as a cook for Somalis. At the time, Kanyi had no idea that his journey would lead him to the US, where he has now spent the majority of his life.

Kanyi’s Kitchen was inspired by a desire to introduce his young American children to the dishes that he and his wife enjoyed while growing up. He started out making Somali dishes as a way to feel connected to his grandfather, whom he never met. Now, Kanyi is steadily cooking his way across East Africa, trying cuisines from each of the different countries and sharing them with the world.

A Dreamer and Creative Explorer

A dreamer at heart, with a mind full of thoughts and ideas, being in the US has afforded Kanyi the space to explore many different aspects of his creativity. Years ago, he was known for his stand-up comedy routines in the Kenyan community in Dallas, TX.

He was in college at the time, learning cinematography as part of his degree in Cross-Cultural Missions. He briefly worked in the media department of a church in pre-YouTube days before moving on to photography and blogging.

Photography has been a thread running through Kanyi’s work for over a decade now. He started out taking pictures of anything that interested him: Architecture, nature, and people, to mention a few themes. For a time, he focused on portrait photography.

He experimented with self-portraits on his personal Instagram account and ran a deeply moving series he titled Advise to my Future Unborn Son, long before he had a son. The series grappled with the challenges of raising an African American son in an era of increasingly visible violence against black males in the US.

Kanyi also photographs the cities around him. He has Instagram profiles for the pictures he takes of McKinney, Princeton, and Farmersville in Texas. Many of his pictures have been featured in several gallery shows in Texas.

Think about it: In a way, photography and food go together. A picture of a good meal can make one’s mouth water in a way that a description of the same dish would not. There’s a picture worth a thousand words!

For Kanyi, photography led to food in a roundabout way.

Right at the beginning of the pandemic in 2020, Kanyi started selling large batches of the sourdough bread he already bakes for his family. He took pictures of the baked goods and posted them on Instagram.

Business flourished and he quickly had more orders than a one-man show could reasonably fulfill.

The busyness was also taking a toll on his health and encroaching on family time. He eventually wound down the bakery.

One day, while trying to describe to his children some of the foods he was raised on, Kanyi thought he should document the recipes on a blog for other diaspora parents who may find themselves in the same boat. Since his grandfather had cooked Somali food, he started out with Somali cuisine, then decided to explore dishes from other East African countries.

A food blog demands mouthwatering pictures, and Kanyi’s honed photography skills were just the thing to spiff up Kanyi’s Kitchen. He also has a YouTube channel with short videos showing the process of making various dishes. Kanyi finds that his love for cinematography, photography, writing, comedy, and cooking have converged here in a most fulfilling way.

Kanyi’s goal is to bring East African cuisine to the world. As he goes on his journey of discovering and trying different foods from each of the 22 countries, he brings his audience along with him.

His recipes are simple and straightforward; his videos and pictures give glimpses of the cooking process and the end result.

As soon as I browsed through Kanyi’s Kitchen online, I decided to try making Canjeero, a Somali flatbread.

I was struck by how simple the ingredients were and how quick it was to make the stove-top bread.

My end product looked exactly like the pictures Kanyi posted on his blog.

East African Cuisine for the Holidays

Now that we’re entering the holiday season, you may want to serve up some delicious surprises at your holiday table by trying some of Kanyi’s recipes. Check out the blog Kanyi’s Kitchen, follow him on Instagram, and subscribe to his YouTube channel to expand your repertoire of dishes.

Uganda troops to withdraw from DRC by May 31: army