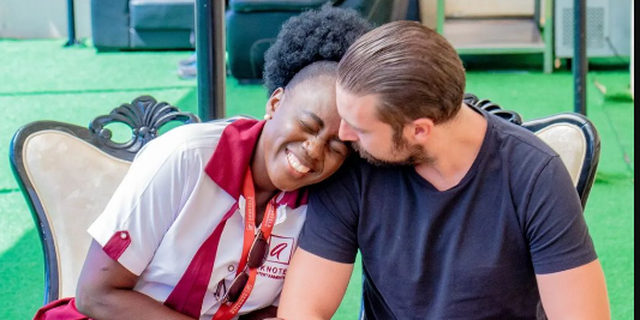 Singer Akothee is not happy with how some men have turned green with envy barely months after she introduced her new mzungu lover, Omosh to her fans.

The mother of five recently took to social media to shame and slam men who have been exhibiting bitter behaviours over her new romance.

According to Akothee, there are some men who started hating her the moment she showed off her man Omosh to the world.

Taking to her Facebook page on the morning of Thursday, November 24, the Baby Daddy hitmaker posted a photo of herself in a tight embrace served by Omosh, followed by a short caption telling off the bitter men.

Akothee wondered why the men became bitter following Omosh’ arrival but disclosed that she suspects most of them thought they could bag her.

The musician also used the chance to warn the bitter men to keep off her page because they will hurt even more in 2023 when she will be officiating her union with Omosh.

“Some men on this page are soo bitter since Omosh appeared ,kwani you had hopes to be the next one ? Ukiwa umepitia bundles na Dm sijibu

By the way Unfollow NOW I am tired of blocking you , just unfollow for your peace . Why are you stuck on a wall of a person who doesn’t match your brain? Its you following me ,I have no idea what you are following

Akothee’s rant came barely two months after she complained about her family.

As earlier reported by The Kenya Times, Akothee disclosed some of her family members were not happy when she informed them, she had found a new man.

According to Akothee, some even tried to sabotage her upcoming wedding in vain.

She noted that their reactions hurt her since all she expected from them was their congratulations and nothing else, including contributions.