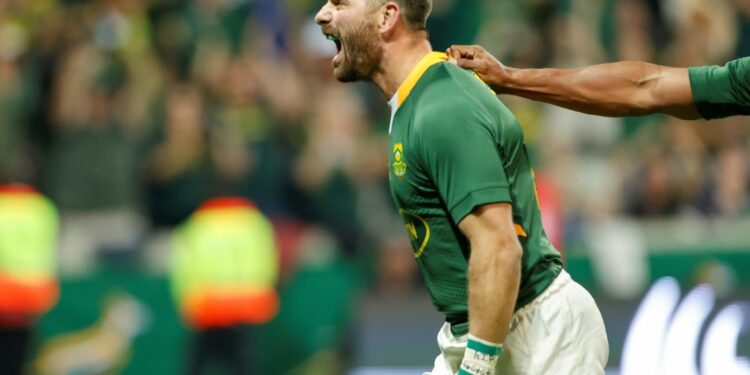 South Africa head coach Jacques Nienaber said on Tuesday he had named Willie le Roux at full-back for this weekend’s Autumn Nations Series Test with France in Marseille to deal with the hosts’ “unique” kicking game.

Le Roux, 33, is one of five changes from last weekend’s loss to Ireland as winger Makazole Mapimpi drops to the world champions’ bench for Saturday’s game in Marseille.

Les Bleus are on a record unbeaten run of 11 Tests against all opposition and last played the Springboks in 2018.

“The back-three we’ve selected, we think it’s the best combination to suit that,” Nienaber told reporters.

“For me, from a coaching perspective, it’s exciting to see that,” he added from their base up the Mediterranean coast in Toulon.

Scrum-half Faf de Klerk, lock Franco Mostert in for the injured Lood de Jager, hooker Bongi Mbonambi and loose-head prop Ox Nche are the other fresh faces for the game at the Stade Velodrome.

De Jager has a shoulder injury while Jaden Hendrikse, who started last weekend’s defeat in Dublin instead of de Klerk, misses the matchday squad.

Nienaber has kept faith with Damian Willemse at fly-half despite the 24-year-old missing a simple shot at goal against the Irish and then handing the kicking duties over to Cheslin Kolbe.

Willemse had been behind Handre Pollard and Elton Jantjies in the pecking order before the tour, but both are missing.

Pollard is injured and Jantjies is dealing with personal issues.

“I don’t want to call guys our third choice, even though he’s playing now only his fourth Test at 10, we all know the quality of the player,” Nienaber said.

“It’s different to go into a Test match with a Springbok on your chest and you have to kick in front of 85,000 people and you know it’s for your country.

“It’s a different type of pressure.

Uncapped fly-half Manie Libbok, who was the United Rugby Championship’s leading scorer last season, is named on the bench alongside Montpellier’s Cobus Reinach.

“Manie, meanwhile, has showed his big match temperament in the United Rugby Championship and he has been training well since joining the team, so if he gets a run, it will be a great occasion to make his Test debut,” Nienaber said.

“A guy like Cobus will also bring a different dimension to our attack, and it is a bonus that he knows the conditions in France and has also played with some of their players,” he added.

S.Africa Slams 'Out of Reach' Climate Aid for Poorer Nations