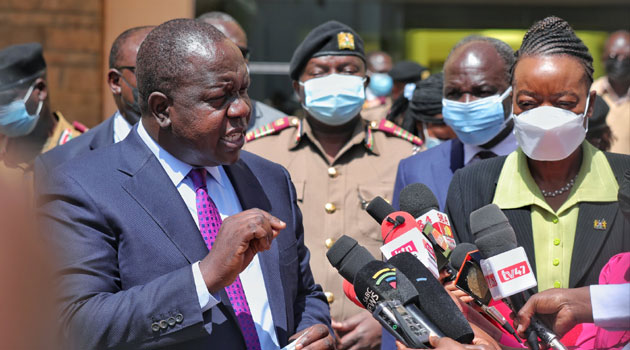 Interior CS Fred Matiangi has termed claims that the government is using chiefs to bungle the elections as ridiculous.

The allegations were made by DP William Ruto and his Kenya Kwanza camp.

The interior CS stated that his meetings with grass root administration officials were purely because they are colleagues.

Moreover, Matiangi made this remarks on Tuesday, August 2 following criticisms received from politicians accusing him of using chiefs to the advantage of Raila Odinga.

However, Matiangi said he will not stop calling chiefs and working with them until he leaves office.

“We meet chiefs all the time, that is the job we do, that is who we are supposed to work with,” he stated.

Furthermore, the CS noted that such claims made by a section of political leaders are all lies.

He then added that Kenyans can differentiate the truth from lies.

Nonetheless, Matiangi made these remarks after having a meeting with senior security officials drawn from the Rift Valley region in Molo.

During the meeting, the Interior CS revealed plans to heighten the presence of anti-riot GSU police in the region.

Likewise, Matiangi reported that eight individuals linked to the leaflets circulated in Eldoret had been arrested.

Furthermore, the Interior CS noted that security agencies do not anticipate a challenge as implied by some politicians.

“I am confident because I have faith in the citizens of this country, we are going to have a peaceful election,” he said.

Nevertheless, the Interior CS’s response comes barely a day after the deputy president accused top officials in the Office of the President of fomenting chaos in Eldoret and the larger Uasin Gishu, after the emergence of leaflets bearing inciting messages.

William Ruto further said that President Uhuru Kenyatta needed to rein in officials in the Ministry of Interior to prevent an escalation that could lead the country into chaos.