DP Gachagua:Kenyans Should Contribute Part of their Pay to Fight Hunger 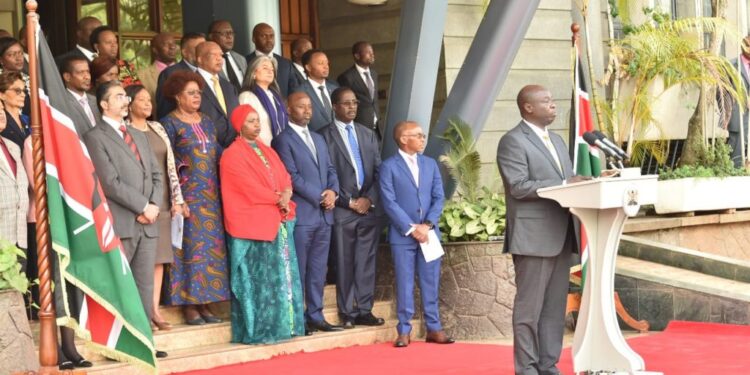 DP Rigathi Gachagua when he unveiled the national steering committee on drought response.Photo/Courtesy

Deputy President Rigathi Gachagua is appealing to Kenyans of goodwill to contribute a percentage of their salaries to help fight drought effects.

Speaking during the launch of the national steering committee on drought response Gachagua asked Kenyans to offer support in protecting the lives of those affected.

The DP says many people have entirely lost their livelihoods and are dependent significantly on assistance to meet their basic requirements.

He says they will provide a paybill number for the Kenyans to channel their contributions to help feed  rescuing those affected by the drought.

“We appeal to Kenyans of goodwill to contribute a percentage of their salaries to a PAY Bill NUMBER we shall be publishing soon,” he said.

“Already, our men and women in the Kenya Defense Forces have offered to forego a day’s salary to contribute to the response kitty. The National Youth Service has also made their contribution.”

Gachagua wants Kenyans in food-surplus counties to make their contributions through the office of the governors and the county commissioners.

At the same time, he wants the media to make a financial or in-kind contribution in terms of airtime and newspaper space to popularize the appeal and the paybill number that will be provided.

“There will be no parallel pay bill and means of making contributions to this appeal other than through the official channels outlined herein,’ he said.

“We are warning cartels who may take advantage of this initiative. We will catch you.”