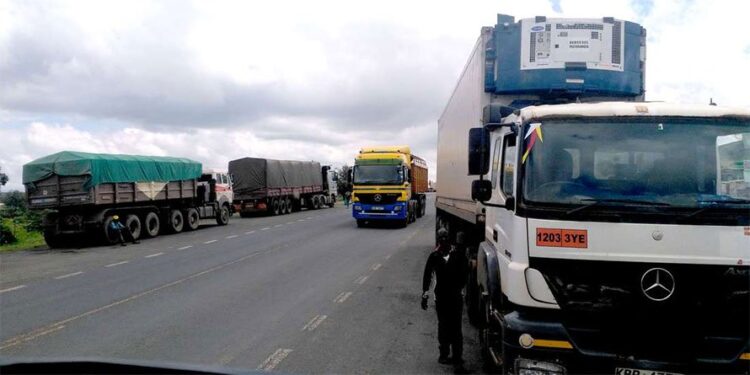 234
SHARES
1k
VIEWS
Share on FacebookShare on TwitterShare on WhatsApp

Two Kenyan drivers were yesterday killed and another two went missing after their trucks were ambushed along the Juba-Nimule highway in South Sudan.

Security agencies in Juba said they had responded to a report of an attack in which the drivers were attacked, and their vehicles torched. The motive of the attack was not immediately clear.

“We were informed that some trucks that were driven by Eritreans were attacked at Neseito, so we sent a traffic police team to the scene of the incident but up to now they haven’t returned and thus I don’t have the full details of what happened. We will inform the media tomorrow [today] about the investigations,” said Mr. Dak.

Juba could not confirm the nationality or number of drivers caught in the chaos, but an association of Kenyan long-distance truck drivers said two of its members had been confirmed dead, and another two were missing.

“I was informed that three trucks – two fuel trucks and one goods truck – were attacked by a group of armed people along the Juba-Nimule road at around 4am yesterday. Two drivers were burnt to death and two were missing.”

“We can’t tell whether those who went missing have died or are in hiding. I have informed the Kenyan government about the incident and I appeal for investigation into the occurrence,” Mr. Kerote said.

The association did not disclose the exact location where the incident happened.

Notorious for Ambushes
One driver who arrived at the scene after the attacks said he saw two bodies that had been burnt beyond recognition in two of the trucks.

The Nation could not verify the authenticity of the photographs.

The Juba-Nimule highway connects the capital of South Sudan to the border with Uganda, the main route Kenyan drivers use to ferry transit goods to South Sudan.

The highway is notorious for ambushes and illegal roadblocks by some of the militia groups in South Sudan.

The country returned to normalcy after seven years of war in February last year, following the formation of a transitional government of national unity.

However, some groups have refused to sign the peace deal, allowing continued sporadic attacks on civilians across the country.